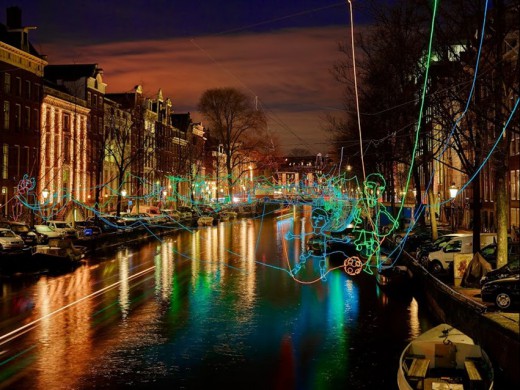 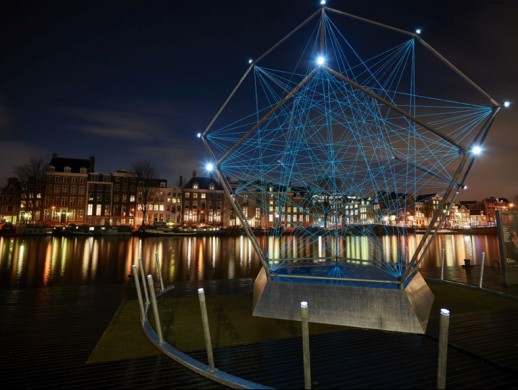 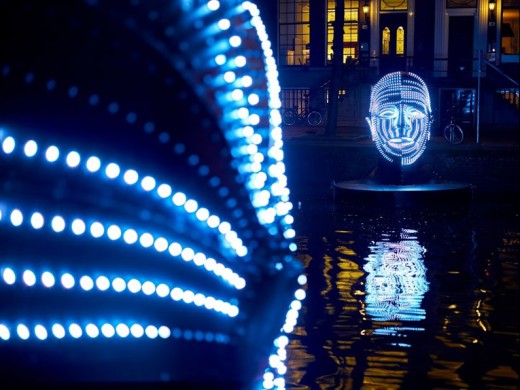 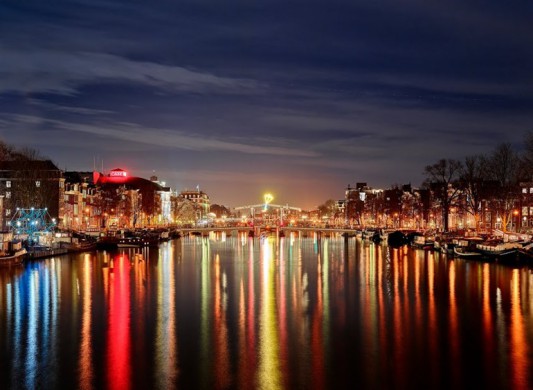 This is the 4th Year for the Amsterdam Light Festival. It is a complement to early sunsets when it is dark by 16.30. Then it comes alive. There are two ways to see this exhibition and celebration to light. By boat and walking/bike. Which mode should you choose? Well, both actually. And here is why …

The original initiator for the festival was Felix Guttmann who had a business interest for establishing it. He owns 45 skippered boats that sell canal tours. His most important clients are the tourists. Between december through February their numbers are small. What to do? Being a pragmatic Dutchman he came up with the dia of a light exhibition, of international importance that played to the canal boats.

He approached  Rogier van der Heide, an international architectural light designer, for assistance. So this is NOT an Amsterdam subsidized event. It is a private initiative that receives contributions from various Dutch cultural foundations. The city itself, and support from several Amsterdam’ commercial enterprises including a percentage of the canal boat ticket price from all operating companies.

Its total cost is around two million euro. And it has attracted international attention. For the press viewing, I sat at a table, on a boat, with a German and English journalist. Across from us there was a Japanese film crew. There are other light festivals around the World, but what makes Amsterdam’s special is it is ALL original work.

In March, of each year, an announcement is posted on the Internet asking for proposals for projects. This year over 350 serious proposals around the theme Friendship, were submitted, from 35 countries. A jury selected 38 art works and installations from the 100 finalists.

So seeing it by boat is the ideal way … almost. Almost, because the boat never stops during the 75 minute tour. There are works that you might want to linger at. And, of course, you can do that by bike or by walking. And that part is FREE. Online you can order tickets at a 25% discount off the 20 euro price.

I am not going to review every piece, in fact, only a few. The boat tour begins at Central Station, however press preview began at the Amsterdam City Hall. We started down the Herengracht at the Amstel. From the Amstel to the Utrechtsestraat there is one long and continuous light sculpture piece. And it is by an Amsterdam’ artist who is returning for his second appearance in the festival: Rolf Westerhof.

His is a spectacular piece that stretches 160 meters and very colorful. Details of the concept at http://bit.ly/1QhfnQw. Next comes  Talking Heads which is light in motion. That is, there are two large head-like objects looking across the canal at each other. When a boat interrupts their light sensors a program activates facial expressions which are always different since all boats are different sizes.

You view a conversation and interpret the words as to the expressions you see. Further on, at the Leidsegracht, are 21 different Haring-like figures dancing across the bridge. Literally Impressive!

Americans will no doubt be surprised to see three caricatures of the Statue of Liberty. Instead of a torch, each is holding on an extended arm a cornucopia (a horn of plenty). In the water space between Central Station and the Damrak is an interactive light piece. Your tour boat goes through the center of the object. Cool! And just a little further on there is Merry Go Round Europe. As the boat approaches it, motion sensors switch on the merry-go-round which then acts like a merry go round at a carnival.

There is also a walking tour in the neighborhood of the Plantage which will take you about 90 minutes to see everything. Don’t miss Bands of Friendship, from India, which consists of nine circular light rings in as many colors. It creates an illusion of infinity. And, oh, so much more. Don’t miss it! This what surprising Amsterdam is all about … constant surprises 365 days a year.