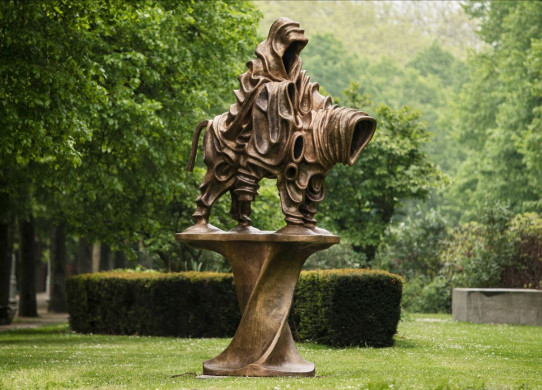 The exhibition is planned in tandem with a solo presentation of Van Lieshout’s work in Carpenters Workshop Gallery’s booth (504) at The Armory Show, New York in March 2020.

World-renowned for his immense and visionary projects, Van Lieshout gained international recognition for pioneering a practice that straddles the boundary between art, architecture, and design. Since the beginning of his career, Van Lieshout has continued to explore the borders of what art can be, even when this approach was unprecedented or taboo.

From living sculptural installations that assert or question independence, to invented objects and thematic bodies of work that push all limits, Van Lieshout dissects and invents systems—be it society as a whole or the human body—to explore power, self-sufficiency, politics, fertility, life, and death. A phrase drawn from Italian filmmaker Sergio Leone’s epic Western of the same name from 1966, ‘The Good, the Bad and the Ugly’ has become an apt lens through which to view Van Lieshout’s thematic bodies of work.

The title can be seen as a thread throughout Van Lieshout’s career—he approaches complicated problems from multiple angles, highlighting ethical and societal issues while presenting alternative solutions and, at the same time, emphasizing their adverse effect. His work probes questions that ignite paradoxes and new perspectives, highlighting ethical or practical issues.

The exhibition at Carpenters Workshop Gallery includes new sculptures from Van Lieshout’s ongoing and overlapping bodies of work, including: CryptoFuturism, The End of Everything/The Beginning of Everything, and The New Tribal Labyrinth, which demonstrate his everlasting lust for experimentation with sculpture while inventing a new material vocabulary.

Van Lieshout’s CryptoFuturism revisits the Italian Futurists a century later to look at resonances with emerging Fascist tendencies today, using his art to reveal the interplay between Utopia and Dystopia. Van Lieshout embraces emerging technologies—from genetic manipulation to robotics and big data—to draw parallels between the societal threats faced in the early 20th century and the circumstances we face today. Starting his research by building huge machines in order to destroy or recycle all possible materials, Van Lieshout deconstructs notions of sustainability with techno modernist speed.

The End of Everything/The Beginning of Everything, began by inventing solutions to problems that we face across the fields of climate, energy, and food in order to save the world. The works engage machinery to address circularity, destruction, creation and entertainment; the artist even destroys his own work in order to construct new pieces.

The New Tribal Labyrinth, an ongoing “Gesamtkunstwerk” begun in 2010, reflects on hyperconsumption and the effects of our globalized economy. Driven by a romantic longing to return to the origin of our contemporary culture and wealth, the project aims to deify and reinvent the industrial revolution to reinstate contact with raw materials.

The New Tribal Labyrinth presents a vision of a possible future—an alternative society inhabited by imaginary tribes who dedicate themselves to tools and industry, creating new settlements to “become one with the machine”. The project focuses on the main pillars of this new way of living: farming, industry, leadership, and new rituals—as exemplified by works such as The Leader and The Walking Sticks.

Van Lieshout’s latest sculptures will also be presented in dialogue with his historic works, such as The Technocrat, which marks the first bronze sculpture by the artist. The edition was conceived in 2007 in collaboration with Carpenters Workshop Gallery’s founders as part of the artists eerie and famously controversial project Slave City.

Rotterdam in the picture | 175 jaar fotografie in Rotterdam