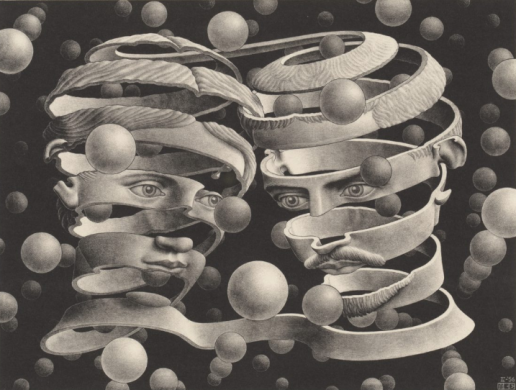 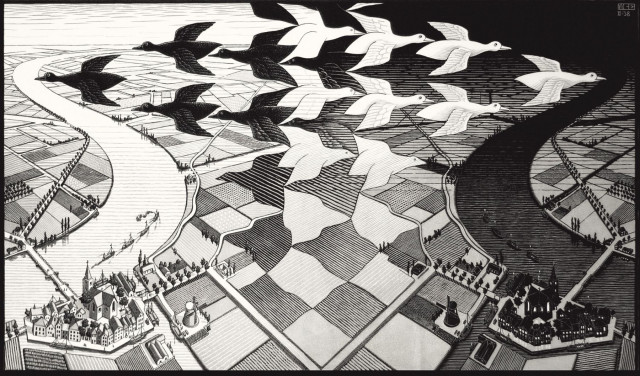 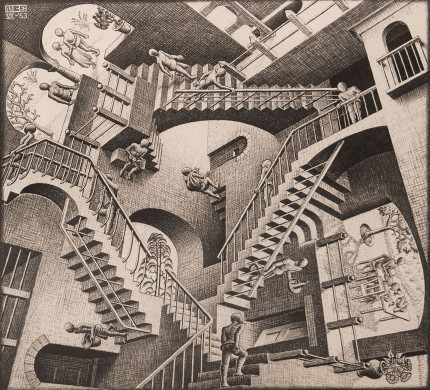 Bruce Silverstein is pleased to present M.C. Escher: Prints, Drawings, Watercolors and Textiles, an exhibition curated by Dr. David Steel, curator of the blockbuster exhibition The Worlds of M. C. Escher: Nature, Science, and Imagination at the North Carolina Museum of Art.  Escher’s math-inspired, mind-bending, and multidimensional “impossible constructions” bridge the boundaries between art and science. His artwork was a precursor to OpArt , and more broadly, an artistic phenomenon that has seeped into the consciousness of contemporary culture.

Featuring seventy-five works by one of the 20th century’s most important print-makers, this is the first ever New York gallery venue to display a survey of M.C. Escher’s oeuvre, providing insight into his intellectual and artistic interests as well as visual evidence of his unsurpassed technical virtuosity. On display are the finest examples of Escher’s work, including iconic prints, rare watercolors, exquisite early drawings, as well as a one-of-a kind printed textile from his own home; one of 12 known textiles extant, and the largest of its kind.

Born in the Netherlands, in 1898, Escher began to sketch and make prints in his early teens, and later studied at the Haarlem School for Architecture and Decorative Arts. In 1921, Escher visited Spain where he was exposed to native Moorish tiles decorated with tessellated, interlocking repeated patterns. These would have a significant influence on the subsequent development of his artistic vision.  Escher soon moved to Italy and spend years creating drawings and prints that played with light and contrasting elements, depicting monochromatic landscapes, natural forms and intricate architectural studies. These works laid the foundation for his future adventures into perspective. This exhibition includes works from Escher’s Italian period including rare one of a kind drawings.

By 1929, Escher work had begun to attract the attention of art critics and his prints were featured in exhibitions in Holland and Switzerland. It was at this time when Escher began to experiment with the concepts of the division of the plane and metamorphosis, presenting objects that gradually evolved into something completely different. The notion of metamorphosis would be a theme he would return to time and time again, as in his iconic work Day and Night, 1938, which would become the most celebrated of all his prints.  An extraordinary print of Day and Night, is in this exhibition.

In 1944, Escher produced his groundbreaking print Encounter, which incorporated tessellation and metamorphosis, and also introduced an important theme of his mature works, the evolution of two-dimensional forms into a three-dimensional existence. The introduction of the 3-D “illusion” would result in a period of great growth, with the creation of Three Spheres, 1945, on display in this exhibition, and Drawing Hands, 1948.  His first “impossible construction” followed soon after, Relativity, 1953, featuring a series of staircases crisscrossing in a labyrinth-like gravity-defying interior that has been copied and reproduced countless times contemporary culture--particularly cinematic culture, as seen in Labyrinth, the shifting staircases of Hogwarts, Inception, and Night at the Museum.

While Escher was not a trained mathematician, they were among his greatest admirers, recognizing his work an extraordinary visualization of mathematical principles basing some of their subsequent discoveries on Escher’s research. Included in this exhibition will be examples of Escher mathematical studies utilized in creating his works.

M.C. Escher’s work is in the collections of major museums around the world, with significant holdings held by the National Gallery of Art, Washington, D.C. and by The Hague, Netherlands. His museum exhibitions draw record crowds wherever they are held.

Dr. David Steel, former Curator of European Art at the North Carolina Museum of Art, was the curator of the exhibition The Worlds of M. C. Escher: Nature, Science, and Imagination, for which he was the primary author of its accompanying catalogue. David Steel is a graduate of Dickinson College, where he majored in Latin and Fine Arts. He received his M.A. and Ph.D. in the History of Art from Bryn Mawr College. He has organized numerous exhibitions and published works on a variety of topics including Renaissance, medieval, and baroque art; Rembrandt’s etchings and copperplates; Outsider and folk art; Monet; Rodin; and, most recently, pareidolia.