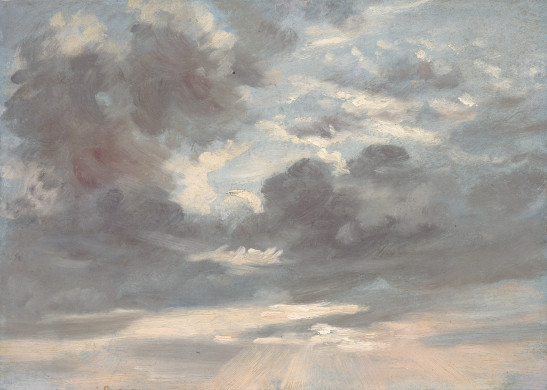 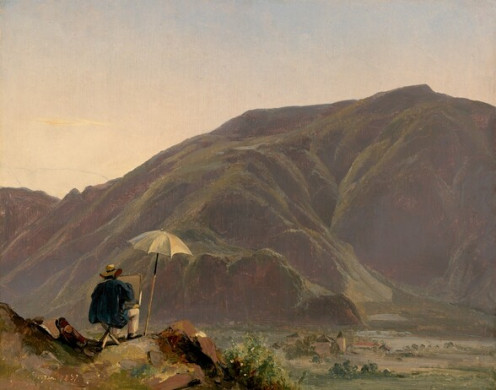 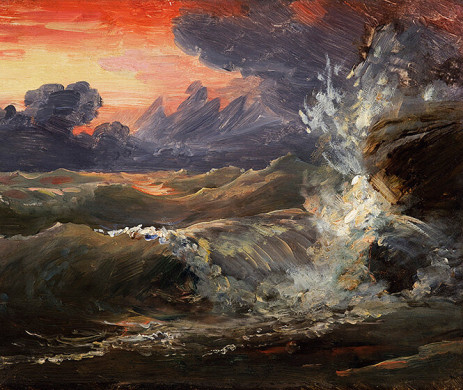 The exhibition brings together over one hundred and fifty oil studies from the collections of the Fondation Custodia in Paris, the National Gallery of Art in Washington, The Fitzwilliam Museum in Cambridge and a private collector, offering a fresh look at open-air landscape painting in Europe between 1780 and 1870.

Occupying a place between painting and drawing, these études – or studies – were small-scale works, mostly executed on paper, and painted quickly before the motif in order to train the hand and the eye in capturing fleeting effects of light and colour. Though some were later embellished in the studio, they were not seen as finished pictures intended for sale or exhibition, but as a precious resource which artists could draw upon to bring a sense of freshness and immediacy to their official work. At the time, they would only have been known to an intimate circle of friends, colleagues or students.

Artists from all over Europe (and wider) dedicated themselves to sketching in oil on paper or a piece of canvas in the open air. Included in the exhibition are works by Pierre-Henri de Valenciennes, Achille-Etna Michallon, Camille Corot, Rosa Bonheur, John Constable, Joseph Mallord William Turner, Christoffer Wilhelm Eckersberg, Johan Thomas Lundbye, Vilhelm Kyhn, Johann Martin von Rohden, Carl Blechen, and many others. The exhibition is not organized chronologically or by school but by motif: trees, rocks, water in its different appearances, volcanoes, skies, rooftops, Rome and the Roman campagna, Capri.

The exhibition opens with a section which brings together a diverse group of oil sketches which all seem to pose the same question – what does it mean to paint in the open air? They evoke the sensation of being confronted with nature, while also encouraging the viewer to think of the practicalities of working out-of-doors. In order to make these studies, artists had to carry all of their materials with them, often on long hikes to remote locations. In Coignet’s view of Bozen, the paraphernalia required by the plein air painter – paint-box, folding stool and parasol – is depicted just as carefully as the vast mountainous landscape.

Trees were a crucial motif for any landscape painter. In this section we find careful painted studies of them, either in isolation or in groups, faithfully recording details of the bark, moss, branching, roots and, especially, foliage. A pioneer of plein air painting, Simon Denis presents a close-up of a tree bathed in golden light. Decades later, the Danish artist Janus La Cour made a detailed study of an ancient olive grove. The inscription “Tivoli 18–30 April” suggests that he returned to his subject for brief sessions over several days, at times when he could be sure of working in consistent light conditions.

Water was a particularly alluring motif for the plein air painter, faced with the challenge of depicting the shape-shifting, transparent qualities of this element and the impossibility of fixing in oils the mesmerizing rhythms of its waves, currents and ripples. The German artist Christian Morgenstern captured the force of the water gushing down a waterfall on the River Traun, in Bavaria. With remarkable freedom of touch, Baron Gérard’s sketch evokes the power of the stormy sea and crashing waves, set against a fiery orange-red sunset. Here, the artist is less concerned with the depiction of a specific place than with the mystery and immensity of the sea which fuelled the Romantic imagination.

The variety of shapes, colours and textures of the earth’s crust were just as fascinating to the painter of landscape studies. In Vilhelm Kyhn’s surprising study, rocks are meticulously rendered in shades of brown and grey-blue, and the calm body of water becomes an almost abstract background. Artists in Italy were particularly attracted to the caves and grottoes which riddled the volcanic terrain, such as the one depicted by Louise-Joséphine Sarazin de Belmont.

The most immaterial of all the natural motifs, skies offered an endlessly variable opportunity for practice. Capturing the shifting patterns of light and shade as clouds move across the sky meant working very quickly. Stormy or serene, overcast or brilliant, John Constable was one of the sky’s most systematic chroniclers. In this luminous study, the artist left a fingerprint in the still wet-paint.

The Light of Italy: Rome and the Campagna

Italy plays a central role in the history of plein air painting, as it is where most artists of the period initiated their experiments with the technique. Drawn to Rome by a desire to imbue themselves in classical culture and study the Old Masters, young painters travelled to Italy from all over Europe to complete their education. The grand views and ancient ruins, the magical quality of the southern light and the fairly consistent weather conditions created the optimal setting for painting sur le motif. Camille Corot is a pivotal figure in the history of plein air painting and embodies the transition from the neoclassical academic tradition to the experiments of the Impressionist avant-garde who followed him. With its bold geometry, Corot’s strikingly modern view of San Bartolomeo is considered one of his masterpieces.

The countryside surrounding Rome combined the natural beauty of its rugged landscape with the majestic ruins of its classical past. Known as the Campagna, it became an artistic laboratory for plein air painters who went on sketching excursions together, often working side by side. Caruelle d’Aligny’s intriguing view of Olevano, for example, was painted during a trip he made alongside Corot in April 1827.

Southern Italy: the Bay of Naples, Volcanoes and Capri

In addition to Rome, many artists ventured further south to visit the Bay of Naples. Edgar Degas had family ties to the city, and in his youth painted a group of plein air oils on paper which beautifully capture the pearly quality of the Neapolitan sky. Vesuvius was an alluring motif and appears in a number of studies of the region, most often as a dormant rocky giant in the background. The period covered by this exhibition, however, was one of intense volcanic activity and many artists undertook often-perilous journeys to witness one of nature’s most awe-inspiring sights. Jean-Charles-Joseph Rémond’s study captures a particularly dramatic view of the eruption of Stromboli on 30 August 1842.

The island of Capri was an especially popular destination with northern European painters, and a number of renowned German and Scandinavian artists painted iconic views of its rocky coastline and inky blue sea. One of the jewels in this section of the exhibition though, is an anonymous study of a terrace bathed in dazzling sunlight.

The final section of the exhibition shows artists turning away from the classical evocations of Rome and the idealised Italian landscape and focusing instead on much humbler motifs, often in their native land. These are impromptu views of rooftops, farmyards, dilapidated buildings and other overlooked corners of the world. Looking out from a window, Frederik Rohde carefully rendered the red roof tiles he saw, but his true subject appears to be the wind, which blows through the poplar trees offering a glimpse of a church tower in the distance. Executed with much looser brushwork, August Egg’s farmyard shares this sense of immediacy.

Working in Nature: from Drawing to Painting

The development of painting in oils en plein air has its origins in drawing, and the motifs explored by this exhibition had been depicted by artists in charcoal, chalks, or pen on paper as early as the sixteenth and seventeenth century. In order to highlight this long-standing tradition of working in nature, a selection of drawings from the rich collection of the Fondation Custodia has been included in the exhibition rooms.

Expedition Nature, Not all who wander are lost in CODA Museum

The Theatre of Wrong Decisions: What if there is not enough livable nature left to share?