Urban Provocation 1, Towards a Civic Future 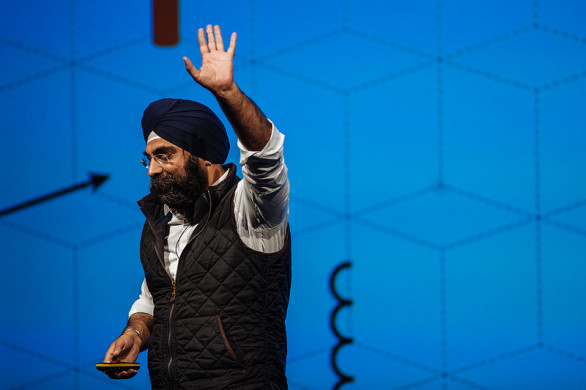 According to Indy Johar, one of the highlights of WeMakeThe.City 2019, we need to radically re-imagining and redesigning the ways in which we value, organize and govern our institutions and society, in order to deal with the urgent challenges we face.

During the Season Opening, Indy Johar shares some of his provocations for ecologically-healthy and socially-inclusive cities. Not by discussing the status-quo, but by taking us beyond systemic change, envisioning an alternative urban society. Join us during this imaginative start of the new season, to envision, discuss and shape a civic future for all of us.

After a short introduction, Indy Johar will present three provocations for an alternative, civic future. With each provocation, he will discuss the possibilities with two experts.

Provocation 1: Towards a Sustainable Civic Future

Indy Johar and Harpo ’t Hart, Embassy of the North Sea and the Parliament of Things.

Provocation 2: Towards a Thriving Civic Future

With Amma Asante, director Landelijke Clientenraad; and Farid Tabarki, founder & director of Studio Zeitgeist and author of The End of the Middle.

Provocation 3: Towards a Democratic Civic Future

Indy Johar is an architect and co-founder of 00 (project00.cc), for which he has co-founded multiple social ventures from Impact Hub Westminster to Impact Hub Birmingham, along with working with large global multinationals & institutions to support their transition to a positive Systems Economy. He has also co-led research projects such as The Compendium for the Civic Economy, whilst supporting several 00 explorations and experiments, including the wikihouse.cc and opendesk.cc. Indy is an Advisor to the Earth Security Initiative and a non executive director of WikiHouse Foundation.

Most recently he has founded Dark Matter – a field laboratory focused on radically redesigning the bureaucratic & institutional infrastructure of our cities, regions and towns for a more democratic, distributed great transition. Dark Matter work with institutions around the world, from UNDP (Global), McConnell (Canada), TFL, GLA (London) to Bloxhub (Copenhagen)

Indy was one of the main speakers during WeMakeThe.City 2019, where he spoke during The State of the Region (on the necessity of a boring -bureaucratic- revolution), WeMakeThe.City Opening Night (on urban leadership and systemic change), Minority Report (on superdiversity and inclusion) and Common Ground (on inclusive finance in the collaborative city).

Border Sessions 2019: Rights and or power for non-humans in human society

Border Sessions 2019: The Kitchen Hacker's Guide to the Food Galaxy

Architecture in Development: Do More with Less