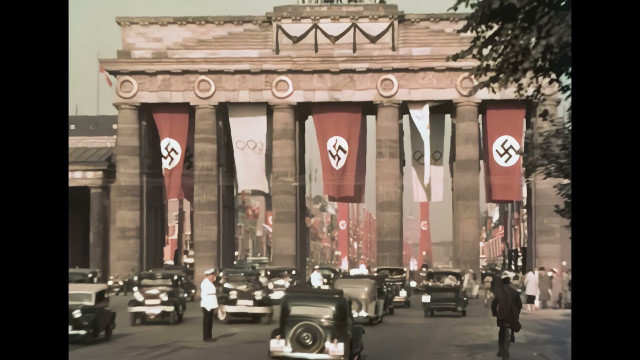 A short film with interesting views of old Berlin in 1936. It was filmed when the city was bustling with activities surrounding the Olympic Games. There is also a short fragment of the horse jumping competition during these games.

The entire city is decorated in red banners with swastikas. Little did the spectators know that this was a prelude leading up to WW-II. Many famous buildings and locations appear in the film like the Brandenburger Tor and the famous shopping street Unter den Linden.

These games are in particular remembered for its hosting by Adolf Hitler plus the controversies surrounding Jesse Owens, an American athlete of African origin, who won four gold medals. This was not in line with the intentions of the Nazi regime to demonstrate Aryan supremacy during these games.

The original film has been motion-stabilized, slightly speed-corrected, straightened, flow-corrected, color-corrected and also enhanced with modern Artificial Intelligence software. In the second part, a side-by-side comparison is shown between the original (very wobbly) footage and the restored version. The stabilizer had to zoom in often to obtain enough ´wiggle room´. Much obliged Rick88888888

A Trip through Berlin in 1900 in colour!

Along the Berlin Wall