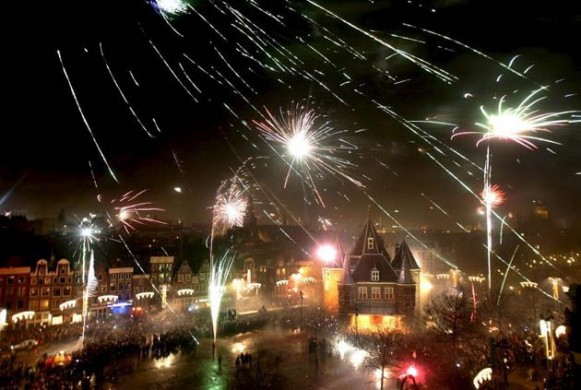 And a HAAAAAAAAAPY New Year..This is certainly one year when the wish for success is most sincere. A few galleries have announced their closing and that isn't good. Others have moved or are moving to smaller spaces. It is a time for survival.

And, unfortunately, the artist is not only seeing a big downsizing of their market, but also declining opportunities for alternative part time or full time employment in other areas. Well, that should lead to more production if only to give them something to do...But, who is going to pay for the materials? The announced subsidy cut backs are still on the books; art foundations and other related groups are all knocking on the same doors begging for private support. But through all the grimness there are a few bright spots; a few galleries have had very successful shows. The serious collector is always there. The economic downturns affect the new collectors and those that see art as a pastime. 3D has seen one trend and that is prices are going down for works of art. And where I see "cheap" prices I see red dots. I shall continue to encourage the art loving public to BUY, BUY, BUY. Who knows? Some of you may get the message.

The press release for Realisme 12 prints it thus: REAL IS ME 12. Cute, but not really relevant. Art realism---or representational art---is alive and well and on show at the Passenger Terminal Amsterdam building (Piet Heinkade 27).

One hears complaints, from time to time, uttered by the general art interested public that avant garde art has forgot what art is all about. Well, this is not the time nor place to have that discussion. But what neither side may understand or refuses to acknowledge, there is avant garde realism. You can see this visually, for your self, on entering the exhibition area and in the first row of galleries. Lieve Hemel has its stable of artists on view and they range from hyper-realism (almost like looking at a photograph) to impressionistic and surreal realism. And some of these artist can be classified as avant garde. But it becomes even more prevalent at the booth next to Lieve Hemel... Albus Lux (Roosendaal) shows stunning avant garde photography by Liesje Reyskens. Great colors, much humor and all with a conceptual edge...Directly across the aisle is Galerie Lilya Zakirova (Heusden aan de Maas) exhibiting mixed media paintings by Natalya Zaloznaya that lovers of realism would question as being "realistic." Doesn't matter, because the works are visually exciting...And that's what art is all about!

Wait 'til you see Allan Forsyth's "Nova" at ARE ITLED (Herpen). Nothing about it is realistic accept the original source of the imagery which was a landscape photograph. What you will see is an explosive expressionistic rainbow of colors that looks like neon. Great!...Don't miss the nearly ten meter high "figurative sculpture" sitting on an ironing board at Kunstruimte Wagemans (Beetsterzwaag) that has "dreadlocks" made from spoils of colored thread. And wait 'til you see the sky paintings of Daan de Jony. Thirteen docile to angry skyscapes with a variety of cloud covered skies that set a mood...Witzenhausen Gallery (Amsterdam) outdoes realism with the 3D photography of Jeff Ross (UK). The dancing lady seems to leap out at you and, well, really does, sort of.

Art Kitchen (Amsterdam) shows a large selection of artist that's style can best be described as "conceptual realism." "Performing" for your pleasure is a dancing robot and it is "naked;" the title, "Fallen Angel." Julia Winters (Russia) presents "conceptual portraits" that are all eyes and in two dimensions. They make you dizzy! That is, there are two portraits superimposed on the other with about three cms., depth between each plate of glass. Added embellishment, like chess pieces, add to the mystery. "The Flower of Evil,"by Alexander Schebracq is an iconic 3D glass flower that projects from the wall like a sunburst. Dramatic! (3D asked Schebracq if the city of Amsterdam intended to replace the light stands that graced the Rokin before the construction of the North South Line began? He said he didn't know, but suspected that they would not do so. You can still see his set of light stands along the Damrak. Great work that stands out from all the garish neon.).

And there are unexpected surprises! At "GALERIE bart" (Amsterdam) shows the work of Sierk van Meeuwen who recreates the 17th century world of Vermeer, for one, with 21st century avant garde realism. One painting features three "Playboy-like"bunnies surrounding a young man---the artist---who sits in a Hugh Hefner-like pose. Cool!...At Morren Galerie is a large paintings by Theo Mackaay that reflects the styles of Picasso, Modigliani and Klimt combined; and it works! Check out Scott Bartner's exceptional realistic portraits of women...But if you want your realism really realistic, don't miss Galerie Petit (Amsterdam), on the upper level of the PTO. Work by Siemen Dijkstra's woodcuts of fields and beaches; Stef Verbraeken's views of Amsterdam; Ton de Laat's incredible watercolors of envelopes with colorful postage stamps; and the tree etchings of Reinder Homan.

So, if you think realism means only a pretty picture, well it is time for you to educate yourself. If you like art like an average person, 3D guarantees you will find something at REAL IS ME 12 that will make you opened your pocket book.

Here is something that sounds very special; and it is scheduled for Sunday (22nd Jan) beginning at 15:00 and continuing into the early evening. Leine Roebana is a modern dance company that has had its performances praised by the Dutch media. But, like many other cultural initiatives, that makes this city so great, subsidy cuts are threatening their very existence. They are trying to do something more than just complain. To raise money, Dancers and musicians will perform in uniquely designed rooms of the Lloyd Hotel & Cultural Center: "You will be dazzled by high quality dancers, musicians and singers in a totally different ambiance from the theatre." There will be 10 "intimate presentations." Also, "a wonderful dinner will be served [and] you will be treated to live dance and music as well." (special dietary menus on request.)

As why I specifically dislike the ubiquitous Albert Heijn Is for various reasons: 1. You can NOT expect to find standard items at ALL the AH branches; 2. Where the product sits, on the shelf, sometimes there is NO price tag; 3. Often, even when there is a price tag, is in NOT in agreement with the bar code readers' interpretation at the check-out counter; sometimes the difference is as much as one euro; 4. AH is often out of standard items, especially those marked as BONUS.

I won't go into any more detail at this point, but what got my goat this time was that I stopped yesterday at the AH at Koningsplein for a half liter bottle of "Rode Spa." There was NO price tag on the shelf, but I knew the AH, at the Waterlooplein, charges 41 euro cents. I was charged, this time, 89 euro cents. When I questioned the cashier, she said that prices are not all the same at AH stores. Today, I stopped at another AH branch for a half liter bottle of Rode Spa. The price? 33 euro cents. Unbelievable that one location charges three times the price of the same product as another location. There should be a law!
***
WHAT YOU HAVE MISSED:

Well, that was a lot to read...But...There is ALWAYS much going on in Amsterdam on the Art Scene...What a joy to live in a city which puts culture right up there with garbage collecting when it comes to attention. But, hey, folks, some one's gotta pay for it...And that someone is YOU. BUY, BUY and BUY some more. Save an artist and you save his family.