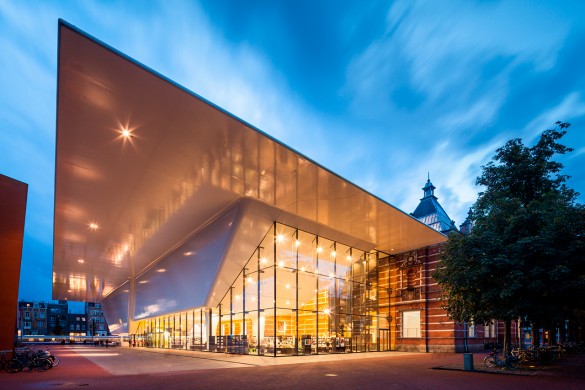 The second half of the Amsterdam Art Season 2011-2012 has had a slow start. Fewer new shows than in years past; more than a few galleries have gone inactive. But, from time-to-time, there have been exhibitions which had several red dots. Possibly, the sluggish Dutch economy hasn't had the most dire affect that might have been expected.

But that still doesn't mean that thing could not be better, much better. You got to do your part. 3D has noted that both galleries and artists are doing their part by slashing prices. Sure, you still see work for 8,000 to 15,000 euro, but, now, lots of work is priced at 250 to 750 euro. Affordable for most working people.

3D had never eaten Peruvian food before and wasn't sure what to expect. To boot, this was "fusion" and not the true form of that country's cuisine. The restaurant's design, itself, is avant garde chic. Clean lines in a simple setting.

There were six starters listed and each is described and the description reads like a dream dish; your mouth waters! With everything sounding great the choice should be Piqueo Criollo (for two) which is a combination of five starters and priced at 22.50 euro. I skipped them all---save it for another time---and checked out the entrees. I selected Canilla de corderio laqueade en salsa de cliantro (21.00 euro). It is a lamb knuckle and the secrets to cooking it is long and easy. This was not only cooked that way, but twice cooked which meant that it rested at least 24 hours between cooking stages. It had the delicate flavor of young lamb resting in a wine sauce and dried yellow peppers and a dressing of fresh cilantro. I can only describe it as succulent. On the side of the plate was a compote of rice and red beans which had been cooked and molded into as patty. It was topped with yucca which has a puree of sweet potatoes as its base. I passed on wine and ordered beer: Cuspuena (Peruvian, 4.00 euro).. it had a distinctive flavor with elements that brought to mind some of the outstanding Mexican beer like Bohemia and Dos X.

Other entrees included a fish dish, breast of duck and stir-friend strips of fillet of beef. (17 to 21:00 euro.) One that caught my eye was Pollow a laoola con raviolis de queso rice which is chicken in a puree of red panka peppers prepared in casserole with fresh cheese ravioli in dressing of cream yellow peppers and cashew nuts. Gosh, that sounds good!.

Dessert was a problem. The choices ranged from a soaked cake decorated with passion fruit and covered with a reduced juice to a creamy mousse of lucama (a delicate tropical fruit) to a moist chocolate cake covered with a creamy chocolate dressing and vanilla ice cream. I passed on all of them in favor of Pie de limon (a three layer lemon pie with a crunchy cookie crust, cream with reduced lemon juice topped with meringue). The pie de limon had a sharp lemon tartness that almost made you sweat and enough sweetness that said it was okay. All desserts are priced at 9 euro.

At one point, during my meal, I saw a waiter carrying a tray of cocktails through the room. While 3D is not a connoisseur of the bartender's art of making alcohol concoctions but they did look tasty as well as elaborate.

The total bill was 34.00 euro. I had no complaints. Open daily. http://www.mashua.nl/main.html

This is a sister restaurant to Casa Peru (Prinsengracht 669 @ Leidsegracht). the menu is traditional Peruvian.

WHAT YOU HAVE MISSED:

As to the art and design...Well, this show is a real group effort. The title is "Route 10/66" and is meant to both reflect the legendary Route 66 that winds all the way from Chicago to LA and 66 artists that have directly and indirectly contributed. However, not all 66 artists are showing at the hotel; 56 are exhibiting in other sections of Amsterdam's NewWest. This is a group effort by individual locations in the NewWest. There is a wall of photographs which pictured their work and indicate where you can see it. Here are a few of those you will see at Artemis.

The other show is "The New York Times Magazine Photographs." Once a week, the New York Times newspaper publishes a magazine that focuses on everything from entertainment, culture, social to political subjects. Of course, being the New York Times means doing something that rises above all the rest of publications. As I result, the articles are illustrated by top photographers. They not only take portraits but often create "art" photography to convey the point of an article. The exhibit is comprises eleven individual parts such as reportage/journalistic, celebrities, fine art photography, et al. It is a big show divided between several galleries; don't miss the two rooms that overlook the Keizersgracht. Also included are actually pages from the magazine and greatly enlarged reproductions. There are a couple of videos too. One has 14 actors----many well known, Matt Damon, Michael Douglas, and a nearly unrecognizable Natalie Portman as a vamp undressing---acting out, silently, a 60 second scene. The show was curated by Kathy Ryan, Photo Editor of the magazine, and Lesley A. Martin, Publisher of Aperture Books. Until 30th May. https://bit.ly/2Lavlwl
***
At "smith-vissers GALERIE" (Noorderdwarstraat 7) are man and wife showing their individual work. Jook de Jong does ceramic bowls and containers, She ornaments the work with leaves, butterflies and three dimensional frogs (4 cms., high 34 cms., wide @ 85 euro; 27x20 cms., 560 euro.)...Paul de Jong is a representational painter with abstract tendencies. He emphasizes the abstraction that he sees whether it is a crumbling building or an electrical outlet. There is even a surreal nuance that comes trough from time to time. (60x50 cms., oil on linen @ 1,400 euro; 70x60 cms., oil on linen @ 2,500 euro.) Until 21st April. https://bit.ly/2OVDLt0
***
Meiro Koizumi (Japan) presents a video and an installation at "annet gelink gallery" (Laurierstraat 187). The video is shown, on a two way screen, in the main gallery space. We see a traditional Japanese room with a low level table for eating at. A man and woman are sitting at the table. The lady is serving dinner to the man. He is reading a newspaper and because of the news he is talking about going off to fight in the war (WW II). The scene comes to an end and almost immediately a new one begins with the couple assuming different positions. The dialog---under titled in English---is the same. Then the camera focuses on the table and from the actions of both people we suddenly realize that they are both blind. (How does the man read the paper?) In some ways, the concept is reminiscent of Kurosawa's film classic Roshaman. The installation, in The Bakery, also has a WW II theme. There is a projector, on the floor, projecting the video onto the ceiling. What we see is a man doing a charcoal drawing of a B-29 USofA' bomber like the one that dropped the big one on Hiroshima and Nagasaki in 1945. No price list. Until 12th May. https://bit.ly/2u9Hxa3
***
At "gallery 9" (Keizersgracht 552) there is the work of two conceptual artists. Robbert de Goede, who is also an architect, does boxes that he defines as "spatial compositions." Well, what does that mean? It means that he makes geometric/abstract linear imagery from red thread. Of course, he does the designs in several ways; some are more complicated than others. But each is captivating because of its unique configuration. All the boxes---of various sizes---are painted white and contrast nicely with the red thread. Simple and elegant work. (16.5x16.5 cms., foam board, glass, thread, MDF @ 250 euro; 27x27x25 cms., MDF, thread, glass, acrylic paint @ 2,500 euro.)...Manja Hazenberg identifies her work as "objects." Some hang on the wall, some are three dimensional and hang on the wall, and some just sit on a table. The material is zinc. She works with it several ways from using acid to attaching gold leaf. The wall hanging objects are also studies in conceptual redundancy; there are from nine to 16 small square plates to each "canvas." Her smaller constructions are very nice and the configurations vary in some unusual and unexpected ways. (13x13 cms., zinc and paper maché @ 450 euro; 70x70 cms., zinc and wire on canvas @ 1,750 euro.) Until 5th May. https://bit.ly/2O2dGJ6
***
Spring is here and there is no reason to sit in your room alone...come to an art gallery, oh chum, come and enjoy the visual excitement that will stimulated your winter-logged cultural senses. Blossom into a living breathing-glad-to-be-alive homo sapien. Oh, yeah...And buy something. BUY A LOT...but: BUY! BUY and BUY some more. Let's kick the recession into oblivion.