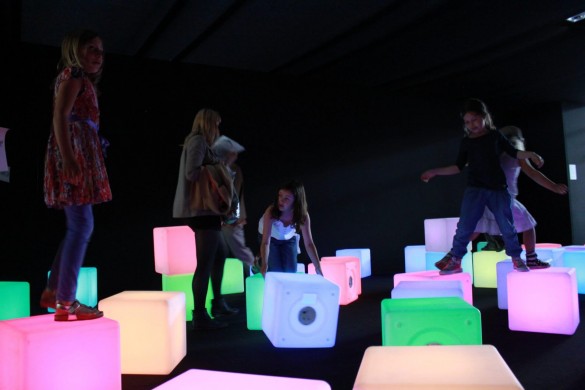 The Amsterdam art fair began in 1985 as an initiative and under the direction of Wim van Krimpen. Politics interjected itself almost from the beginning and within a few years there was an alternative fair at the Beurs van Berlage. Several galleries had protested that they had not been invited.

A few years after that, the two fairs were joined together and for the next couple of years Amsterdam got a "supermarket of art." It included not only the traditional forms of art but also art objects an even furniture. And it was moved to one of the older halls. No one was pleased.

It was then upgraded to meet the standards of international art fairs; and another formula was introduced. Still later, a new concept was settled on in which there would be two halls, one with avant garde galleries and the other with contemporary art.

The new director was Annieka Oele and not only calmed the waters but would go on to create more than an "art fair" but a "city art experience." Alternative art spaces were welcomed to be part of the fair with their own exhibitions and buses were provided that ran from the RAI to various locations throughout the city. Each fair had a theme of sorts and several corporate sponsors signed on. She also improved both promotion and marketing and changed the name from KUNST RAI to ArtAmsterdam to get more international attention.

She would exit as director just after the 25th anniversary exhibition. And with that departure the unravelling of everything she had put into motion began to come apart. Politics once gain raised its ugly head.

During the last year  there was much gossip. Certain galleries that had become disenchanted demanded a new venue and less galleries. Avant garde galleries would be welcomed and others ignored. Well, the problem with relocating the exhibition was that the RAI organization owns the rights to both KUNST RAI and ArtAmsterdam. What to do?

Easy answer. Have TWO fairs, one in June and one in September. The former would be both avant garde and contemporary and the latter strictly avant garde.

Two weeks ago it was announced that the September show, ArtAmsterdam, had been cancelled. The reason for this, according to the rumor mill, was not enough galleries signed up to dissension amongst those who had taken the initiative from the beginning. Foreign galleries seems to have been at the center of the dispute.

Now back to the present and the new KUNST RAI. It is located in one of the older halls that make up the RAI complex and is directly opposite the hall which has been used for the last several years. On entering, your first impression is that the fair has been organized on a strict and limited budget; there is NO catalog. There are no frills; no carpeting, only an exposed cement floor, badly scarred. The sign identifying the gallery is four meters from the floor---you get a sore neck, straining to see it, as a result.

There don't appear to be any corporate sponsors; no companies sponsoring art competitions; no special area for the kids; no tours, neither in Dutch nor English. In other words NO EXTRAS.

As to the galleries, well it seems there are several of the players from ArtAmsterdam and about 20 that 3D did not know; it is only when you begin to ask where is so-and-so that you realize how many galleries you expected to see that are not here. In fact, there are about 65 galleries present. ArtAmsterdam generally had about 125.

One gallery holder told 3D that they had not intended to participate but that there was a last minute phone-sales attack that made them an offer of a significant discount, on space, that they couldn't refuse.

But with all that said, the diminutive fair makes it much easier on the feet. ArtAmsterdam took 3D from four to four and one half hours. I did this fair in less than 90 minutes.

I asked several galleries for their opinion about this new fair and ALL were enthusiastic and optimistic and approved of the ambiance and changes.

And,  what to expect? Well, just about everything. The quality of work is high and there are more than a few exciting artists showing. There did seem to be a larger proportion of paintings to photography, but that, to me, is a plus. Not that I don't like photographic art but, unfortunately it has taken precedent over good ol' paintings.

The tickets are 15 euro per person. However, I was told that if you go on-line that several galleries allow you to download a FREE one.