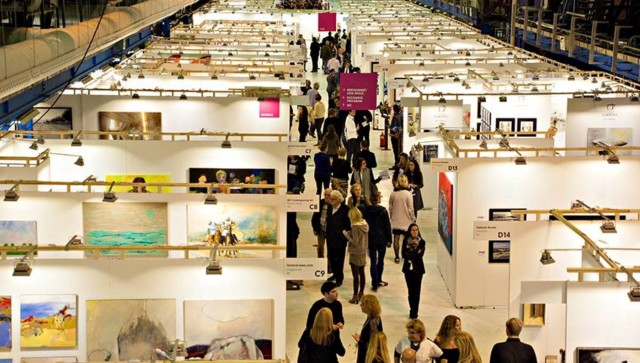 The AFFORDABLE ART FAIR is sponsored by an international organization with like fairs in London, New York, Mexico City, Melbourne, et al. Until this year, 3D considered it Amsterdam's bastard child of art fairs. It just didn't compete with ArtAmsterdam. However, I don't mean to denigrate those years because I saw galleries from England and other countries that presented quality work, not to mention "minor" Amsterdam and Dutch provincial galleries that never had an invitation to the BIG ONE.

Comparing this to the shabby affair of the reconstituted KunstRai, which replaced ArtAmsterdam, this may now be the premier art fair for Amsterdam.

The first AAF exhibition was in 2007 and that year, and until recently, there were always around 25 English galleries and most from places like Bath, Manchester, Liverpool, etc. Galleries that you never see on the international scene. So it came as a shock this year when I did a country count and discovered that only TWO UK galleries made the short trip to Amsterdam. Even Italy outdid the British with FIVE representatives; France Four; one from both Russia and Japan. 3D has been on the warpath against the whole idea of austerity, especially when it affects the cultural life of the country. This statistic would seem to support my contention that austerity---especially the British version---is cultural suicide...Ooops, back on my soap box...

The total number of attending galleries---about 80---is down from previous years; and some gallery' holders told me of being offered a discount and one said, "I got the space free!" Whatever. The result is that the fair is less claustrophobic than in previous years. The aisles are a bit more wide which should make it easier to navigate.

Needless to say, I will not attempt to review all the galleries and, this year, I will put the emphasis on price and where I saw real bargains along with other comments.

At Aan De Amstel I asked about their recent adventure at the LA Art Fair; Art Affairs and PS both attended and were pleased with the results. The gallery holder, for Aan De Amstel, said that a couple movie stars had bought work; she declined to mention them because when one offered to pay with their VISA card, the payment was rejected. Hard times in Hollywood. But the good news was they did even better at the Washington D.C Art Fair than last year.

TRIPLE AAA is a consortium of Amsterdam galleries so you can expect a little of everything...And next door was FRANTIC GALLERY of Tokyo that is run by a Japanese man and a Russian man. The work is good...Galerie PIEN RADEMAKERS has an interesting wall for anyone interested in the fashion industry. It is a larger collection of mixed media pieces that look like 20s and 30s covers from Vogue. And while representational there is also a strong linear abstraction to the work

There was fun at the SUPERART booth which was rented by four galleries. St. Art Gallery [sic]  showed something where the name tag read "Pure Evil, Richard Burton's nightmare." The work itself was a take-off of Andy Warhol's silkscreens with multiple portraits of the same person, well, at least the style because there was only one person. What made it special was the tear that ran from the woman's eye all the way to the floor. Cute! 3D liked the humor. I asked the gallery holder if Richard Burton was the artist? No, "'Pure Evil' is!" Oh! And he went on, "The woman is Liz Taylor." Oh! again...A small Amsterdam' living room gallery that calls itself Mini Galerie shows exciting collage work by Louis Reith. ..And Vriend van Bavink has eight wire sculpture pieces by Ralf Westerhof. I had seen his exhibition, at the gallery, at the beginning of September. I was impressed by his ability to capture, in wire, a portrait. I was more amazed by his ability to capture the eyes as if they were really alive and staring at you. Some on display are full figure.

Do you like something that is kitschy, classical, colorful and highly stylistic? Check out the work of Ekaterina Yastrebova at Galerie HONINGEN...The art of drawing is special to 3D and I found Robert Weinberg's large, detailed representational works to be captivating. See it at DEPARTURES IN ART...I like the light box by Perran Costi at RETROSPECT GALLERIES. The artist cleverly lights them as if they were an Edward Hopper painting.

Hey, I mentioned bargains!  At THE ART SHOP check-out the large selection of work by Jacqueline Schäffer who makes these kitschy, colorful and fun sculpture pieces in a variety of sizes and start at 50 euro...For more colorful and kitchy type art take-in David Gerstein's laser cut metal sculptures that are hand painted and in-motion and 3D. Kid you not! Fun work starting at 150 euro...RudolfV is showing Michael Schüster who I had reviewed favorably at his opening at the same gallery. He uses tree leaves to make representational figurative cut-out images. They are all priced at 150 euro...Art A Casa Probably gets the prize for the best price in the show with the miniature rabbit acrylic paintings by Fonny van Raaijen @ 30 euro. Yes! She also is once again showing the mixed media work in sardine cans @ 60 euro.

An Italian gallery represents artists from North Korea. There is a large stack of posters reminiscent of Soviet style art and each has been hand colored. They are signed and priced at 290 euro...But as every coin has two sides there are two sides to pricing at AAF. LIONEL GALLEY has 25 examples of work by Damien Hirst. But, wait. If you have been turned off by his shark and calf in a preservative solution or scandalized by the 100,000 euro diamond clustered skull, see another side of Hirst. The works are prints in editions. His wood cuts are conceptual minimalism and very attractive. A sample from an edition of 55 will set you back 2,950 euro.

...And there is much, much more. WARNING: In past years, the final day, Sunday, has been so well attended that AAF extended the opening hours to accommodate those still standing in line at closing. Go early, avoid the line.

Several galleries offer 2 for 1 tickets. Check the website for AAF and se if there is a gallery that you know and download. Regular entree fee is 13 euro. Children under 16, FREE. @ Westergasfabriek off the Haarlemmerweg.