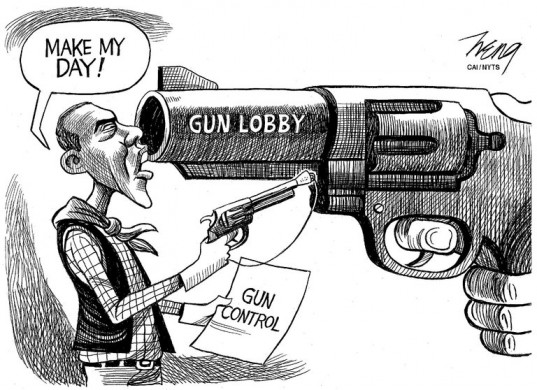 THE POINT IS, THAT KID(WHO KILLED 3, BTW, WOULD HAVE DONE WHAT HE DONE DID WITH OR WITHOUT STRINGENT GUN CONTROL.

AND, I AM NOT OPPOSED TO SOME GUN LAWS, DEPENDING ON THE TYPE OF WEAPON.

How do you know that?  If there were stringent gun laws there would be very few guns on the streets. Few guns on the street means much less opportunity for such acts. Take the 50s, machine guns were illegal and closely controlled. You had NO mass slaughters by private citizens. Today, an AK 47 or Mac 10 is available through gun shows. No check on the  buyer; no record of purchase. And look at the results. Hand guns are even worse because they are so easily concealed and more easy to handle. NO TO GUNS. Europe has it right on this subject.

You far right radicals are sick. Really sick!. Again, this is just BULLSHIT. And, again, no attribution. You accuse me of reading the "wrong material." Well, the "wrong material" I send you is signed by the author and has been vetted by either the NYTimes or Int  Herald Tribune. Who vetted "Obama's Czars with Pictures?" You really should be ashamed of yourself for forwarding such undocumented crap. I note too that many of these "czars" have similar views on gun control that I share. I guess that's what makes them "evil." We all have common sense. You should try using some.

WELL...ARE THESE OUTRIGHT LIES, OR NOT.  DO THESE MEN EXIST, OR NOT.  ARE YOU SO UPSET THAT YOU ARE JUST CIRCUM-NAVIGATING THEIR REALITY.

THESE ARE CZARS IN THE BIG-O CAMP.  WHAT DO YOU FIND FAULT WITH...THEIR ASCRIBED BELIEFS, OR NOT.  AND BY WHAT SOURCES TO YOU REPUDIATE THESE TENETS LINKED TO THEM.

SOUNDS LIKE THE GUILTY MAN IN AN OBVIOUS COVER-UP OF WORDS AND FEIGNED OUTRAGE, ULTRA-LIB BOY!!!!!!!!!!