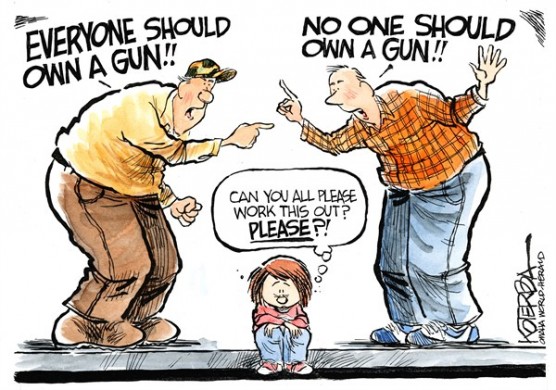 Ah yes, as you said "It would be insane to outlaw guns." From my perspective, it is insane not to outlaw them.

This adventure was perpetrated my a mentally disturb man  as he was described by family. Yet such people are prevented by law to buy guns...Oh, yeah, they can go to a gun show, on a weekend, and buy an AK47 for cash and no checking. Now, honestly SON, what kind of control is that?

DAN.....................Methinks you have little concept of the real
world. If a bad guy wants to buy or obtain a gun....where do you think
he goes....to a gun smith. Hardly. He goes to the underground (for
want of another word). Some guns need to be registered...I agree.
But wholesale banning of firearms...it'll never happen. Not in
Texas....not really anywhere. And, if it should...God help us all.
Oops, sorry.
Forgot that you also want to ban God, or even the concept thereof. Nor
will that ever happen.

For a smart guy, you sure do show at times a lack of common sense and
practicality, and no concept of faith in any way. So....just how much
smarter can you really be???

To you this is "apple and oranges" when I point out that in Holland,
with stringent gun laws, has a 10% murder rate as compared to the USofA
and adjusted to population differences. BUt it isn't. People are
basically the same the world over. Allow them to have guns and
eventually they will use them. At one time, when America was primary a
rural society, guns played an important role. Farmers could protect
their domestic animals from wolves and coyotes; and hunt rabbit and
birds to put food on the table. Of course, the weapons of choice was a
.22 rifle or shotgun. Today, the NRA argues that gun laws will take
away such weapons. Probably so. But where, once, there had been a need
for the greater population, today there isn't. THe NRA argues that the
majority of guns are used by law abiding citizens...I don't doubt that
claim...BUt, Combray automated pistols (it can fire a 36 round clip in
two seconds); Uzi's and Mac10s are not the weapon of choice for a
sportsman, but for all the wannabe Rambos.

I am---or, more accurately---was a gun lover as I have explained in the
past. By sixteen I had about ten guns. BUt I was a bird hunter and the
birds disappeared from Michigan so there was no longer much need to
have a gun. (Footnote:  The Michigan pheasant population, which once
had been one of the best in America, was directly affected by DDT. They
ate the corn laced with it and drank the water saturated with it. It
was discovered that the DDT weakened the egg shells and many never
reached the hatching stage. We have Rachel Carlson to thank for bring
this to hour attention with her book "Silent Spring" and early EPA
regulations that banned the use of it. Just another government
regulation condemned by the like of Cry-Baby Rush, et al)

Sure the bad guys will always have a way of buying a gun on the black
market as they do in Holland. BUt the general public is the concern
here. YOu say if gun laws are introduced then "God help us." It looks
like he is now out-to-lunch since He isn't doing much to "help" the
AMerican public where there is more than one gun per adult.

I read your statement that I want to "ban God." Not so. As I have said
on this topic if people want to believe in a God, that's there
business; it's a personal matter. But for them to impose their beliefs
on me in one form or another is what I am opposed to. It is "I am
holier than Thou" which is the message I get when you say "...you sure
do show at times a lack of common sense and practicality, and no
concept of faith in any way. So....just how much smarter can you really
be???" Again, "common sense and practically" is at the heart of my
arguments to ban guns. How many more kids killing kids, with a handgun,
from their father's drawer; how many more "crazies" taking out five,
ten, 20 or more; how many domestic family killings, where some one
takes out 10 in-laws, must you experience before you realize that the
common sense and practicality arguments are on my side.

I understand your thinking related to gun safety. As for me, I'm not a
gun owner and have never shot a gun. But the world we live in has
changed. I believe, just like the right to believe in God is a
personal issue, so should it be to own a gun. But you are doing the
same thing you accuse the religious set......you're imposing your
beliefs about guns on everyone else. You can't have it both ways.

Now, regarding uzis and Mac 10's etc....I agree with you. There are
laws in place re: the handling of guns. These must be followed. But
if crooks are assured there is no gun in the house, by the enactment of
these laws you propose, the even God cannot help the law-abiding
citizen.