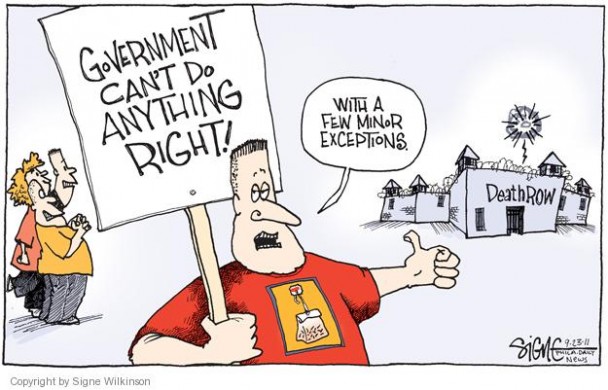 Well this is an excellent reply on your part (scroll down). It is developed and substantial except for the errors and presumptions you make about me.

As to capital punishment, I have said to you in the past that Ted Bundy was without doubt guilty and certainly if any one deserved to be executed he was the poster boy. However, I also argued that spending the rest of his life in prison---especially one like Acola (sp,?) Florida---where he was incarcerated---would have been a far worse punishment. Death ends all. Again, Gary Gilmore DID NOT want to die, but he begged Utah to kill him because he didn't want to spend the rest of his life in prison and said the constant noise was driving him nuts.

My main argument is: What if the man is innocent? You qualify this by saying you are against capital punishment if the conviction is based on circumstantial evidence. As you should be aware---because of the many death row inmates that have been released, in recent years, because of DNA testing---that all too often they were convicted by a kangaroo court; the police withheld evidence that indicated their innocence; or witnesses either lied or were mistaken. As an example. There was a case in Texas, several years ago, where a man was arrested for killing two people in a robbery. The latter took place perhaps 100 miles from his home and work place. At the time of the crime, he was at work. Twenty people testified to that. He had NO police record and was well liked by co-workers. He ended up on death row. What saved him was the arrest of another man for murder and he began to confess to earlier crimes. One of which was the killing of the two people, on a certain date, at a certain town, in Texas. It was that crime that the first man was convicted of...I think I forgot to mention that he was black. Look at the prison population and see the disproportioned number of blacks to whites there is. But it happens to whites as well.

The police have been known---more often than not---to arrest someone for murder because of the pressure they are under to solve the crime. They sometimes plant or manufacture evidence. In many of these cases the arrested individual has rap sheet three, four, five or more pages long. It is considered better off for society that he is dead is their thinking. And that may be. But if they are allowed to do this, and a blind eye is turned by the court, the real killer is still at large and in position to kill again; not to mention it weakens the entire judicial system and the fabric of society.

I did NOT state that I'd assumed that "you" would site the Bible as an argument for capital punishment but said "Who is the arbiter on what their God has to say?" You have a tendency to misquote and/or take my words out of context. Please be careful of that.

And, again, I ask how the home invaders will know that you have a gun?  You answer "...that ignorance can be helpful in inhibiting that criminal."  But the rate of home invasion, across the USofA, continues to rise. So, ergo, with the vast majority of AMericans having guns  has NOT deterred home invasions.

As to your discourse on God and abortion, it really sounds like double-Dutch to me. As an example, you say that "when someone throws his belief system on to you...it does not mean he is pushing that belief onto you." I don't agree. I don't agree because---keeping this argument in proper context---we are speaking about abortion. You want to ban its practice except for a few exception. You go on to say, "I am not telling you that that I am right and you are wrong because of my belief in God" but you say you want a law saying it is murder by the mother and anyone who assists her in the process. So by advocating the  abortion process illegal you are pushing your belief on to me and the majority of society whether or whether not is is based on your religion conviction or moral fortitude. That is what I find unacceptable.

You weakly come back with the NRA's axiom that "Guns don't kill people, people kill people." What cute bullshit word-playing. You go on to say, "Maybe we should outlaw kitchen knifes."  I have already answered this position. It is exceedingly more difficult to kill someone with a kitchen knife than with a gun. That should be obvious. With a gun it can be spontaneous, with a knife it can also be spontaneous but not instantly enacted. Your other arguments about bridges and cars is, of course, irrelevant. We NEED bridges. We need cars. But we also regulate how cars are used; and as to bridges, many have protective screens. You infer that today it is outlawing guns and tomorrow it will be outlawing cars the go over 30 mph. Since Jimmy Carter (a liberal socialist pig in your thinking) the government has regulated how many mpg a car must achieve. Why? To reduce the USofA's dependency on foreign energy sources. The "weasel"  has extended the requirement to 54 mpg to be achieved by 2020(?). Remember the cars of the 50s that got 10 mpg and an " economy car" 15 to 18 mpg? As to the bridge jumpers, alas, there isn't much a society can do to protect someone from themselves. But there is something that a society can do to protect us from the misuse of guns: OUTLAW THEM!!!!!

Again, you are lecturing me that I ignore "personal responsibility."  Needless to say, I dispute this. Do you remember back in 1988 when Bernard Shaw, of CNN asked Dukakis if his views  on capital punishment would change if someone raped and killed his wife Kitty? He gave a feeble answer. But to me the answer was simple: "Bernard, if you can  imagine how bad I would feel if someone committed such a heinous act against my wife then try and think how bad I would feel if a year or so later---after the man's execution---it was discovered that someone else did it."

As to the rehabilitation of a murderer, it is sometimes possible and often not. My own personal experience of this was something that happened when I was 10 or 11. It was earlier afternoon on Christmas Day. The phone rang. It was my mother's mother. She called to tell my mother that her brother, Bill, was in jail and accused of shooting his wife to death with his deer rifle. Well, uncle Bill had been the only survivor from a Japanese ambush on a small Pacific Island during WWII. He was shipped back to the states and committed to an Army mental hospital in Lexington Kentucky. Needless to say, he neither considered himself to be "crazy"  nor did he like the hospital's environment. He convinced his mother to sign him out and to be put under her care. Seven years later, tragedy.

Uncle Bill got ONLY seven years at Jackson State---his lawyer's plea of insanity was rejected. He was released and rejoined society and actually remarried. He had no other incidents that concerned the police. For each murder there is a story. And more often than not it is a long and complicated one. I read a book on serial killers and the psychologist said that nearly ALL serial killers have been abused as children. It referred to Ted Bundy, but because of the legal restraints did not go into what his history had entailed. Obviously, rehabilitation, in his case, was not possible. He was intelligent, very attractive and had a winning personality. Unfortunately, he was a socio-pathe. Was he insane or sane? In my mind, he was insane, but under the laws definitions he was sane. Doesn't matter because he was sick and no one was arguing otherwise. Why did he kill 25+ pretty young ladies? He couldn't fuck them if they were alive. He was a necrophiliac. He would return often, during the first two weeks or so, to the the the woman's corpse, to have intercourse with it. He brought along make up to mask the decaying body. That's sick. but is it insane?

As I have said before, we live in a strange and weird world.

1) ABORTION...... The killing of another human being is wrong, in
almost every situation. Of course, in times of war, or self-defense
etc, etc....there are exceptions. There are always exceptions. In the
case of abortion for all the wrong or selfish reasons, is morally
repugnant, physically wrong and beyond redemption. Of course, this
generates the Q of when does life begin, your Sat. Evening Post, so
this Q will remain unresolved between the 2 of us. But, I believe you
know, deep in even your Godless heart, who is right here.

2) CAP. PUNISHMENT.....Your ploy, used more than once, cites the
possibility of the criminal's innocence. I give in to this part of
the debate, which is why I support it only under strict conditions.
Again...
let's see the criminal hurt your family, and see where you stand on
this matter.

Life in prison is not worse than death. You may think it is for some,
and, who knows, it may be, but generally.....NO.
Besides, why support these killers for the rest of their natural lives.
(BUT THIS IS NOT A FINANCIAL RESPECTIVE!!!)
Even Christ himself utilized this means for His own end.

Quit citing circumstantial evidence as possibly being misleading and
the basis of a possible false conviction.
We are not talking about that circumstance. (But, by doing so, it
seems like that's all you've got to convince me????)