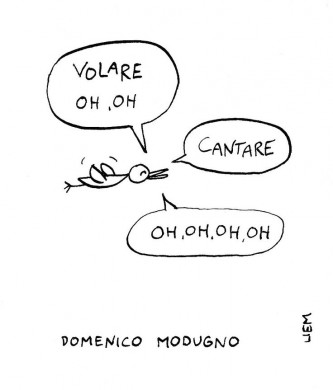 A while back I was visiting an aquaintance. He was smoking a cigarette when suddenly he began to cough. When the hacking had subsided, I asked him when he was going to give up the nicotine habit? "When my troubles are over!" was his reply. He got that right. The day our troubles --- that we devote a lot of worry to --- end, is the day we die.

Problems and worries are a major segment of our life. And what would life be without them?

When I was 14 years old, my parents bought a new house. Next door to us there lived an elderly couple well into their 60s. They had had eight children and one remained at home. Joey, the child, was no longer a "child" since he was 27 years old. However he had been born afflicted with the Down's syndrome. Fortunately, his was not a severe case; he spoke both English --- with a limited vocabulary --- and Italian, the latter his parent's native language. But he had never been to school and couldn't read. During the summer months he would sit in the backyard, of his house, holding a newspaper before him. He never turned the page and would stare at the same page for an hour or more. He wanted people to think he could read.

He wanted people to think that he was normal.

He smoked cigarettes, but was always asking for a light because he was not allowed to use matches. He had little understanding of the dangers of fire. He acted out the actions of those around him. There was a boy, my age, Tommy, living across the street. Tommy was a Johnny Mathis freak --- a popular singer at the time. During the summer holidays, and when all the windows were open, the neighbourhood was serenaded to "Chances Are", "The Twelfth of Never" and "Misty". I still remember some of the lyrics because I heard them so often. Joey then got into the act. He wanted to be a typical teenager. But he wasn't into Mathis. There was only one song he liked, "Volare: Di Pinto Di Blu".  The only Italian words I sem to know are from the lyrics of that song though I have no idea what they mean. Anyway, Joey's bedroom window was about two or so meters across from mine.  I didn't need an alarm clock on those summer mornings to get up by: he turned the volume to maximum.

During the evening, on those hot and muggy Detroit days, Joey would come into our backyard to talk to my father and me as we sat in lawn chairs trying to catch a cooling breeze. He always had a lot to say. He was always describing problems that afflicted the family members, his brothers and sisters. The way he addressed them to us was that it had been left to HIM to make the decision or find the solution.

Joey had no worries to call his own. This made him unhappy.

His father was diabetic and had both legs amputated. Probably, as a result of this, he was a curmudgeon and often could easily be heard screaming something in Italian. Joey and his mother dealt with it; and more and more Joey accepted added responsabilities. And there was a cleaning lady that came in a couple times a week to help out. Life went on.

I would leave my family home and travel 1,000 kilometers away to attend university in the city of St. Louis. My trips to Detroit became more and more infrequent.

On one visit, three or four years later, I was told that Joey's mother had suffered a stroke.  She could no longer cook nor handle the simplest of chores. The children hired fulltime nurses, but none lasted more than two months because Joey's father was very demanding. Finally, they gave up on hired help. The daughter's took turns with preparing meals and Joey, as improbably as it may seem, became  the "nurse". He not only was accustomed to the exhortations of his father but, more importantly, he could deal with them.

On my visits home, I often saw Joey pushing his mother in a wheel chair through the neighbourhood whether it was summer or winter. Joey now had real worries and it seemed to have satisfied him. He was happy that, at last, someone felt a need for him.

Joey would outlive both his parents. When the last one died he went to live with a sister. He would die at the age of 37 maybe a happy person.

The lesson: Life without troubles and worries is no life worth living; and if life is not worth living there can be no happiness. Forget counting your blessing and give thanks for those pesky problems.