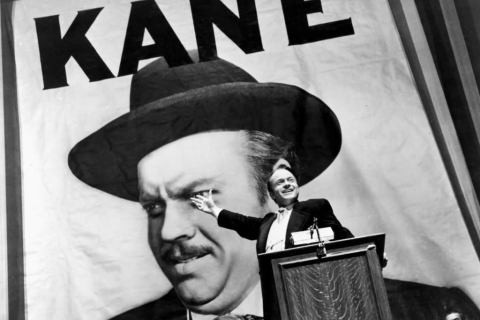 "Hey Dan...You old goat!!!" You talking to me?...You talking to me? More than likely you are holding a mirror to your face...Me, myself and I, still a tender 25. Anyway, that's the image I see in the mirror every morning...Not to mention, I feel 25, too. Well, that is, until I go to do something extraneous like riding my bike, walking up stairs, et al then it's 105. Getting old sucks!

But your speaking of "old goats" recalls one of my favorite one box cartoons. We see a movie studio lot, behind a sound stage. Two goats are chewing on film reel cans. The one says to the other, "The book was better!"

More on old age...This from today's New York Times, "Signs you're an old foggy: You still watch movies on a VCR, listen to vinyl records and shoot photos on film. And you enjoy using e-mail." ("E-mail Gets an Instant Makeover,"  by Matt Richtel, www.nytimes.com, 20th Dec.)

Well, I am more than an old foggy. I never had a VCR. Nor do I know how to use a "remote." In fact, I gave my last TV to a Dutch girlfriend when I left Holland in December 1974. I moved to NYC and there was no need for a TV. The whole city was a film set and it was always in "action." Ironically, I visited a bar in my neighborhood, frequently, that had live music nightly and music people hung out there. One night, at about three in the morning, a man was playing the piano and I said to the person sitting next to me---who worked as a space salesman for Billboard---is that Randy Newman. He replied, " I don't know who Randy Newman is, but that's Billy Joel!"  I replied, "Whose Billy Joel?"  Newman hadn't yet made it in the States ("Short People" was still two or three years off) and Joel hadn't yet made it in Europe. Another night, a guy going through spastic motions was singing "She came through the bathroom window..."  And I said to the bartender, "Is that Joe Cocker?" "No! It's John Belushi." In fact, the entire crew of SNL came to the place after the Saturday programming. More irony, I have NEVER seen the program. Such is life.

But back to the movies...I think the only way to do justice to a film is to watch it on the big screen. I have seen "Apocalypse Now" perhaps eight or nine times and never on TV. One time, I was visiting a friend when it came on the tube and immediately bid him goodbye. Of course, this attitude is in the process of change since I am impressed by HDTV.

Our last conversation was very short...It was at the 20th reunion and we met on the dance floor and just as we began our conversation we were interrupted by Janet Richard. I told her I wanted to talk to you, but she refused to listen and you finally walked away. We never had the opportunity to talk again that night.

I had wanted to ask you how you had found your way to LA---a city I loathe. I had assumed that it might have had a lot to do with your love of the movies. And I'm still wondering about it. But now your in the state of Washington?  Interesting relocations. I have Googled your name from time to time and came up with zilch. Dick Kelly also responded to Phyllis' letter and mentioned that you had written a book on B-movies. Can't find it though. However, I have yet to check Amazon.

Dick also asked if I remembered going to the Lakewood and Cinderella? I replied, that it wasn't often we went to the Cinderella since it was a first run house and more expensive. Then, I pointed out the Time (Jefferson and Chalmers), the Aloma and the Esquire. I recall you kept a "diary" of the movies you saw. Over the years, I have been envious of that. I wish I had been inspired to do the same. Here is an example of why. I remember a film, at the Lakewood, that got my attention, depressed me and I also found myself identifying with the protagonist. I was plus or minus 10 years old. In 1972, I added to my library "The New York Times Film Reviews from 1913-1968."  One rainy afternoon, I went from page to page between the dates of 1948-1954 looking for a scenario that would aid me in identifying the film. Couldn't find it. Flash forward to 1975 or 1976. I'm living in NYC and reading the "Arts & Leisure" page of the Sunday NYTimes. Vincent Canby had listed the Top Ten B-Films. "Gun Crazy" was number four on the list. So I did a little research and learned it had been directed by Joseph Lewis and, even more interesting, the script was by Dalton Trumbo though unaccredited because he had been blacklisted.

Well, another 15 years go by. I'm living again in Amsterdam, on a canal, and a neighbor, who was English, had his boat on the same canal. He was working for a Internet company and had state of the art electronic equipment plus cable for the BBC stations. I was visiting, one Sunday night, and for some reason I related my story about "Gun Crazy."  I left his boat at about 11:30 pm. Thirty minutes later he called me and said, "Guess what is on BBC 1's Late Show tonight?"  It was "Gun Crazy" and he invited me back to see it. It was not quiet the same film I remembered, the protagonist was older and more mature than I had recalled, but it is still a gripping film.

Is this more than you ever wanted to know about old B films?

I am in the sixth year of publishing a newsletter which is a cultural guide to Amsterdam with emphasis on art. Often, when I walk into a gallery, the owner introduces me to the artist by saying, "Daniel is an art critic!"  I quickly set the record straight by saying, "I'm not a crtiic! I don't know enough about art to criticize an artist. I describe to my readers what I see. If that is the style they are interested in, they are encouraged to go see the work for themselves."

On the other side of the coin, I was co-producer, co-scenario writer and protagonist for the documentary " I LOVE ART."  It premiered during May 2009. A Dutch film critic, for one of the daily newspapers, reviewed it...No, that's not right. He was supposed to review the film but ended up reviewing ME. I wrote in my newsletter that that was like seeing "Citizen Kane" and instead of reviewing the work of Orson Welles it was Kane that was taken over the coals.

I justified my criticism of this "critic" by saying that I do not consider myself to be an "art critic,"  but I do think that I am a qualified to critique film.

During the 80s, I published an English language magazine in Amsterdam. A going out guide with film reviews, etc. In preparation, I interviewed a couple of Dutch film reviewers. My opening question was, "How would you approach a Clint Eastwood film?"  Invariably, the reply was, "I wouldn't even consider going to an Eastwood film!"  Wrong answer.

I did a little research an found that I could pick up Roger Ebert in syndication. We use to hangout at the same two bars in Chicago's Old Town when I was living there from 1967-1971. I liked his view of movies. He sent me to see Kurosawa for the first time. Anyway, there was one -problem, at that time, Hollywood films would open here, in Europe, from six months to a year after the USofA. So I often found myself writing the film review. What was even nicer was that I went to the press review showings. A big theater with only five or 10 of us in the audience. The print was always flawless and they always provided lunch. It doesn't get any better.

But, I digress...What is this "JD" thing? Where did that originate?  What are your Top Ten films?