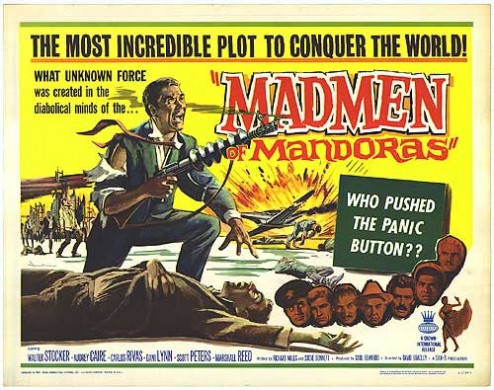 This little known horror jewel is almost unknown for a reason:  basically because it stinks.  It was later re-edited and released for

TV as:  "THEY SAVED HITLER'S BRAIN" .  That should give you a clue where this movie goes!

Most of us know that Adolph Hitler died in a bunker, along with Eva Braun in Germany, in 1945. Not really, says this film!

German scientists and doctors somehow managed to save his head and brain for wholesale revenge on the Allied forces after the war. Betcha didn't know that!

This story tells of their efforts to plot the release of a deadly nerve gas on practically the entire world (I guess that would include Germany, too?) with their Fuhrer nodding his approval from a glass jar, usually reserved for pheasant dinner entrees.   The movie documents their efforts to destroy a lone professor's only antidote serum, which he alone has developed , and which becomes the only possible hindrance to their diabolical plan.  But, in dealing with this one possible problem, they blow the entire effort.

Ultimately, on a tropical island somewhere near South America, the professor and his rescuers foil the plot, with the help of some accurately tossed hand grenades, blowing up the bad guys, and the Fuhrer, before the gas is released upon an unsuspecting world. The Fuhrer, in the back seat of a blown-up black sedan, melts away to oblivion before our eyes, like a wax dummy, which it likely was.

This film isn't half bad.........it's all-bad , but the scenes of the Nazi collaborators rushing about and addressing their leader's head all but guarantees a decent Schlockmeister rating, in this case a respectable 7.5 on the Schlockmeister scale of entertainment worthiness.  Most of the actors are unknown, save for Marshall Reed, a remnant staple from the old B-Western days, who must have been desperate for work circa 1963.  Watch this only if you have the need to get a-head in this world, and ..................... have an hour and a half to completely waste.