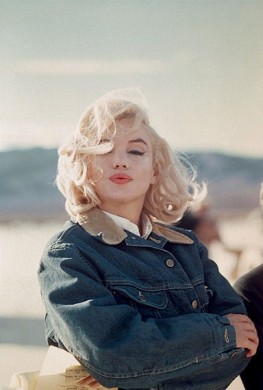 A good pic of MM...on the set for The Misfits.

That IS a good pic of her......on her last released movie set.    I always liked her....saw almost every one of her films.  A good on, I thought, that was less discussed was "NIAGARA"  .

You mention that the photo was from MM's "last released movie." Ironically, it was also the last film of another icon: Clark Gable.

As to Niagara, I agree with that. In fact, I think it is the first film I saw her in and it was one of the early ones.

I believe she was filming "SOMETHINGS GOT TO GIVE"  or a similar titled movie, when she died.

"MISFITS"  was also the final film for Monytgomery Clift and an old B-Movie Western star, whose name eludes me.  It may be mentioned in my book.

SHE HAD A BIG BUTT, AND WASN'T BUSTY, (FOR 'BLONDE BOMBSHELL" STATUS), BUT HAD THAT INDEFINABLE SOMETHING.  AND, I THOUGHT HER GREATEST ASSET WAS HER FACE AND DEMEANOR.