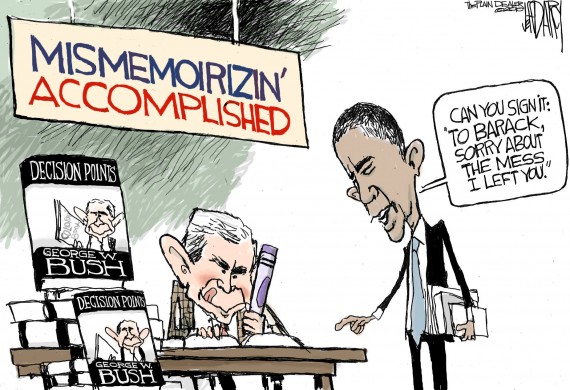 Yes, the Democrats saved the economy. The unemployment rate was at 9.8% when Bush left office; it is now at 8.4. It would be much better had the Republicans not fought the stimulus package and demanded it be reduced. And business are not fleeing overseas. In fact, I just read of several that are transferring manufacturing plants back to the US. The mortgage industry?  How can you possible blame this on Obama. It happened in the eight year of the Bush administration. And you have not been keeping up with the reports on energy. "Under-protected borders?" Have you not seen photos of the fence/wall along the Rio Grande?

I can understand how he wrote what he did and I would like to read each statement, quoted here, in its original context, especially the last one, the most "scary." I am sure it was taken out of context. That's what right wing radicals do. That's their MO.

I WOULD LIKE TO REMIND YOU THAT THERE ARE RADICALS ON BOTH SIDES OF THE AISLE, AND NEITHER GROUP HAVE A RIGHTFUL PLACE IN ANY OF THESE DISCUSSIONS.

HOWEVER, IT SEEMS TO ME THAT EVERYONE OPPOSED TO YOUR VIEWPOINT....IS TERMED A "RADICAL"   WHY IS THAT?

Subject: Fwd: Obama The Cry Baby Victim -- By a Democrat

By a Democrat reporter!

I think it is time that we asked George Bush to step aside so that Obama can get his presidency going.

Here's an opinion piece by Chuck Green who writes "Greener Pastures" for the Denver Post Aurora Sentinel...one of the more liberal papers in the country.

Additionally, Mr. Green is a lifelong Democrat -- so this is rather a stunning piece.

Barack Obama is setting a record-setting number of records during his first term in office:

Most self-serving speeches ever. Largest number of agenda-setting failures ever. Fastest dive in popularity ever!

Just over two years ago, fresh from his inauguration celebrations, President Obama was flying high. After one of the nation's most inspiring political campaigns, the election of America 's first black president had captured the hopes and dreams of millions. To his devout followers, it was inconceivable that a year later his administration would be gripped in self-imposed crisis.

Of course, they don't see it as self-imposed. It's all George Bush's fault !

George Bush, who doesn't have a vote in congress and who no longer occupies

The White House, is to blame for it all.

He broke Obama's promise, to put all bills on the White House web site for five days before signing them.

He broke Obama's promise, to have the congressional health care negotiations broadcast live on C-SPAN.

He broke Obama's promise, to keep unemployment from rising above 8 percent.

He broke Obama's promise, to close the detention center at Guantanamo in the first year.

He broke Obama's promise, to make peace with direct, no precondition talks with America's most hate-filled enemies during his first year in office, ushering in a new era of global cooperation.

He broke Obama's promise, to end the hiring of former lobbyists into high White House jobs.

He broke Obama's promise, to end no-compete contracts with the government.

He broke Obama's promise, to disclose the names of all attendees at closed White House meetings.

He broke Obama's promise, for a new era of bipartisan cooperation in all matters.

He broke Obama's promise, to have chosen a home church to attend Sunday services with his family by Easter.

Yes, it's all George Bush's fault! President Obama is nothing more than a puppet in the never-ending failed Bush administration.

If only George Bush wasn't still in charge, all of President Obama's problems would be solved. His promises would have been kept, the economy would be back on track, Iran would have stopped its work on developing a nuclear bomb and would be negotiating a peace treaty with Israel . North Korea would have ended its tyrannical regime, and integrity would have been restored to the federal government.

Oh, and did I mention what it would be like, if the Democrats, under the leadership of Nancy Pelosi and Harry Reid, didn't have the heavy yoke of George Bush around their necks? There would be no ear marks, no closed-door drafting of bills, no increase in deficit spending, no special-interest influence (unions), no vote buying ( Nebraska, Louisiana ).

If only George Bush wasn't still in charge, we'd have real change by now.

All the broken promises, all the failed legislation and delay (health care reform, immigration reform) is not President Obama's fault or the fault of the Democrat-controlled Congress. It's all George Bush's fault !

Take for example the attempt of Eric Holder, the president's attorney general, to hold terrorists' trials in New York City . Or his decision to try the Christmas Day underpants bomber as a civilian.

Certainly those were bad judgments based on poor advice from George Bush!

You might recall when Scott Brown won the election to the U.S. Senate from Massachusetts, capturing "The Ted Kennedy Seat", President Obama said, Brown's victory was the result of the same voter anger that propelled Obama into office in 2008. People were still angry about George Bush and the policies of the past 10 years. And they wanted change.

Yes, according to the president, the voter rebellion in Massachusetts, was George Bush's fault.

Therefore, in retaliation, they elected a Republican to the Ted Kennedy seat, ending a half-century of domination by Democrats. It is all George Bush's fault !

Will the failed administration of George Bush ever end, and the time for hope and and change ever arrive ???

Will President Obama ever accept responsibility for something / anything?

(Chuck Green is a veteran Colorado journalist and former editor-in-chief of The Denver Post.)

I want my mommy!