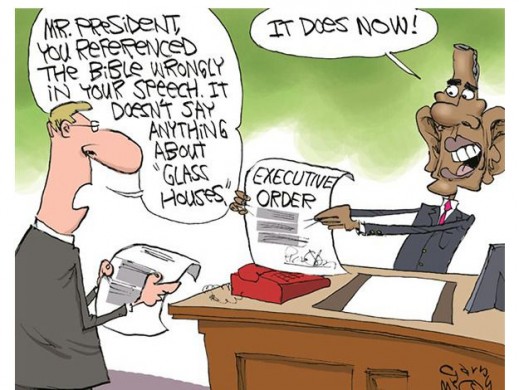 NOW DO YOU KNOW WHY I DISLIKE HIM??

THIS IS A MUST READ, WELL DOCUMENTED TREATISE OF COMMENTS BY OUR PRESIDENT. NOVEMBER IS COMING SOON!

America’s Most Biblically-Hostile U. S. President

When one observes President Obama’s unwillingness to accommodate America’s four-century long religious conscience protection through his attempts to require Catholics to go against their own doctrines and beliefs, one is tempted to say that he is  anti-Catholic. But that characterization would not be correct. Although he has recently singled out Catholics, he has equally targeted traditional Protestant beliefs over the past four years. So since he has attacked Catholics and Protestants, one is tempted to say that he is  anti-Christian. But that, too, would be inaccurate. He has been equally disrespectful in his appalling treatment of religious Jews in general and Israel in particular. So perhaps the most accurate description of his antipathy toward Catholics, Protestants, religious Jews, and the Jewish nation would be  to characterize him as anti-Biblical. And then when his hostility toward Biblical people of  faith is contrasted with his preferential treatment of Muslims and Muslim nations, it further strengthens the accuracy of the anti-Biblical descriptor. In fact, there have been numerous clearly documented times when his pro-Islam positions have been the cause of his anti-Biblical actions.

Listed below in chronological order are (1) numerous records of his attacks on Biblical persons or organizations; (2) examples of the hostility toward Biblical faith that have become evident in the past three years in  the Obama-led military; (3) a listing of his open attacks on Biblical values; and finally (4) a listing of numerous incidents of his preferential deference for Islam’s activities and positions, including letting his Islamic advisors guide and influence his hostility toward people of Biblical faith.

2. Acts of hostility from the Obama-led military toward people of Biblical faith:
• June 2011 – The Department of Veterans Affairs forbids references to God and Jesus during burial ceremonies at Houston National Cemetery. 17
• August 2011 – The Air Force stops teaching the Just War theory to officers in California because the course is taught by chaplains and is based on a philosophy introduced by St. Augustine in the third century AD – a theory long taught by civilized nations across the world (except America). 18
• September 2011 – Air Force Chief of Staff prohibits commanders from notifying airmen of programs and services available to them from chaplains. 19
• September 2011 – The Army issues guidelines for Walter Reed Medical Center stipulating that “No religious items (i.e. Bibles, reading materials and/or facts) are allowed to be given away or used during a visit.” 20
• November 2011 – The Air Force Academy rescinds support for Operation Christmas Child, a program to send holiday gifts to impoverished children across the world, because the program is run by a Christian charity. 21
• November 2011 – The Air Force Academy pays $80,000 to add a Stonehenge-like worship center for pagans, druids, witches and Wiccans. 22
• February 2012 – The U. S. Military Academy at West Point disinvites three star Army general and decorated war hero Lieutenant General William G. (“Jerry”) Boykin (retired) from speaking at an event because he is an outspoken Christian. 23
• February 2012 – The Air Force removes “God” from the patch of Rapid Capabilities Office (the word on the patch was in Latin: Dei). 24
• February 2012 – The Army orders Catholic chaplains not to read a letter to parishioners that their archbishop asked them to read. 25

3. Acts of hostility toward Biblical values:
• January 2009 – Obama lifts restrictions on U.S. government funding for groups that provide abortion services or counseling abroad, forcing taxpayers to fund pro-abortion groups that either promote or perform abortions in other nations. 26
• January 2009 – President Obama’s nominee for deputy secretary of state asserts that American taxpayers are required to pay for abortions and that limits on abortion funding are unconstitutional. 27
• March 2009 – The Obama administration shut out pro-life groups from attending a White House-sponsored health care summit. 28
• March 2009 – Obama orders taxpayer funding of embryonic stem cell research. 29
• March 2009 – Obama gave $50 million for the UNFPA, the UN population agency that promotes abortion and works closely with Chinese population control officials who use forced abortions and involuntary sterilizations. 30
• May 2009 – The White House budget eliminates all funding for abstinence-only education and replaces it with “comprehensive” sexual education, repeatedly proven to increase teen pregnancies and abortions. 31 He continues the deletion in subsequent budgets. 32
• May 2009 – Obama officials assemble a terrorism dictionary calling pro-life advocates violent and charging that they use racism in their “criminal” activities. 33
• July 2009 – The Obama administration illegally extends federal benefits to same-sex partners of Foreign Service and Executive Branch employees, in direction violation of the federal Defense of Marriage Act. 34
• September 16, 2009 – The Obama administration appoints as EEOC Commissioner Chai Feldblum, who asserts that society should “not tolerate” any “private beliefs,” including religious beliefs, if they may negatively affect homosexual “equality.” 35
• July 2010 – The Obama administration uses federal funds in violation of federal law to get Kenya to change its constitution to include abortion. 36
• August 2010 – The Obama administration Cuts funding for 176 abstinence education programs. 37
• September 2010 – The Obama administration tells researchers to ignore a judge’s decision striking down federal funding for embryonic stem cell research. 38
• February 2011 – Obama directs the Justice Department to stop defending the federal Defense of Marriage Act. 39
• March 2011 – The Obama administration refuses to investigate videos showing Planned Parenthood helping alleged sex traffickers get abortions for victimized underage girls. 40
• July 2011 – Obama allows homosexuals to serve openly in the military, reversing a policy originally instituted by George Washington in March 1778. 41
• September 2011 – The Pentagon directs that military chaplains may perform same-sex marriages at military facilities in violation of the federal Defense of Marriage Act. 42
• October 2011 – The Obama administration eliminates federal grants to the U.S. Conference of Catholic Bishops for their extensive programs that aid victims of human trafficking because the Catholic Church is anti-abortion. 43

4. Acts of preferentialism for Islam:
• May 2009 – While Obama does not host any National Day of Prayer event at the White House, he does host White House Iftar dinners in honor of Ramadan. 44
• April 2010 – Christian leader Franklin Graham is disinvited from the Pentagon’s National Day of Prayer Event because of complaints from the Muslim community. 45
• April 2010 – The Obama administration requires rewriting of government documents and a change in administration vocabulary to remove terms that are deemed offensive to Muslims, including jihad, jihadists, terrorists, radical Islamic, etc. 46
• August 2010 – Obama speaks with great praise of Islam and condescendingly of Christianity. 47
• August 2010 – Obama went to great lengths to speak out on multiple occasions on behalf of building an Islamic mosque at Ground Zero, while at the same time he was silent about a Christian church being denied permission to rebuild at that location. 48
• 2010 – While every White House traditionally issues hundreds of official proclamations and statements on numerous occasions, this White House avoids traditional Biblical holidays and events but regularly recognizes major Muslim holidays, as evidenced by its 2010 statements on Ramadan, Eid-ul-Fitr, Hajj, and Eid-ul-Adha. 49
• October 2011 – Obama’s Muslim advisers block Middle Eastern Christians’ access to the White House. 50
• February 2012 – The Obama administration makes effulgent apologies for Korans being burned by the U. S. military, 51 but when Bibles were burned by the military, numerous reasons were offered why it was the right thing to do. 52
Many of these actions are literally unprecedented – this is the first time they have happened in four centuries of American history. The hostility of President Obama toward Biblical faith and values is without equal from any previous American president.

7. "Remarks by the President at the University of Indonesia in Jakarta, Indonesia,"  The White House, November 10, 2010. (Return)

34. "Memorandum for the Heads of Executive Departments and Agencies," The White House, June 17, 2009. (Return)