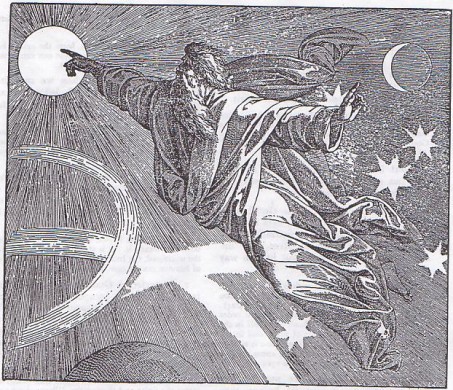 I await your reply...But in the meantime I should explain something and add a suffix to the last e-mail that I began with "I seem to keep repeating myself..." (See below the "immediately below.")

I have a demanding writing schedule during the art season; fortunately, or maybe it is more proper to say, unfortunately, I write fast. So when I reply to you I am doing so off the top of my head and while I try to put as much thought into what I am saying I often fall short in doing a proper or adequate job. In the dialogs (On God) there were a couple that went through three or more drafts. In these "add ons"---for wont of a better description---its zip-zip and press "send."

The first is "I DO believe in the 'general concept' of a Supreme Being." But as I have said, it is the definition of what a SB is where we differ. As I said before, the Catholic Church is willing to accept the Big Bang theory but insist it was God who lit the fuse. You tell me that I must have faith in a Supreme Being existing. Well, this is the difficulty. Astrophysists and mathematicians can define and describe the universe in scientific and mathematical equations all the way back to the Big Bang. Therefore, to me, it is only logical, not to mention, common sense, to say that the instigator or fuse lighter was a just another simple scientific equation.

You have accepted---or seem to---that I have a reasonable argument against established religions but you insist that I must have faith in there being an ultimate creator. Well, the concept of "faith" is man-made as are all religions. Man is a product of an evolutionary process that began billions of years ago. We can pretty well trace our emergence from a collection of algae to the product that now exist. And what does the future hold for us the human race and "man" as we now understand the term? There is the potential that Artificial Life could be achieved in this century. What will that lead to? You may reject the idea and even myself may not look kindly on an inflatable android, with big boobs, that can be purchased, on sale, at Wal Marts, at $99.95. Deluxe model, with real Asian hair, at $125.95. One thing I am sure of is that we would not recognize "man" as he will be in 300 or more years from now. Nor do I think that the most imaginative writer of Sci-Fi would be able to do so creditably.

To me the evidence that has accumulated that there is NOT a spiritual God is overwhelming. There is NO heaven, nor hell. Again, I have had a direct experience with this with my two "death" experiences. And as I have said, because of the experience, I now have no fear of death, nor of hell, nor any expectation of a heaven and, regrettably, not having my endless questions of the nature of being being answered.

Last night, I laid in bed thinking that my reply was rather flippant when I referred to the Gallic wars and Moses getting his feet wet when parting the Red Sea. Let's get closer to the present time. Americans fear the invasion from south of the border. They love tacos but not the taco makers. They "imported" them for their cheap labor and now want to export them because they DO work cheap. I find it ironic. Ironic because who are the "invaders?" Remember the American Indian was in both the North and South continent for 15,000+  years before the white man said, "Hey, it’s our land now from sea to shining sea." And remember, too, that well into the 19th century Texas, New Mexico, Arizona and California was Mexican territory. The USof A was the aggressor in the wars against the Mexicans. They stole their land under the banner Manifest Destiny. But you answer, "Hey that was a long time ago; we can't reverse history." But in our recorded history of about 5,000 years a 150 years ago was only yesterday. So what if the Mexican government now says, "Give us back our land." Americans would laugh at the absurdity of such a demand, not to mention, the arrogance. But those that would be laughing would be those that ignore the present precedent of a race of people demanding their country back and getting it. The Jews of Israel. And as you know they have a damn good argument: "God promised Palestine to us. You can look it up. It's written in the Bible." Ooops, there we go again using the "good book" as a historically legitimate document.

I just sent a reply to your more extended discourse on the subject. And, indeed, I did mention "semantics." I also comment on "explaining FIRST CAUSE." If I could explain that adequately, I could then describe myself as either a "believer" or an "atheist" and, again, it is for that fact why I am an agnostic. Why don't you understand this simple point?

I don't have a TV so I don't watch reality TV. My "near death" experience was as I described. It was like going to sleep, no dreams and I have no knowledge of any events that took place over a two+ weeks period.

Thanks for the e-mail list. The first three I have been in contact with as well as K. Conlon. Jim Conahan also wrote me. My conversation with Geri resulted in my being introduced to her daughter, living in Orlando.

PRO-CHOICE  is without a doubt a liberal tenet.  Conservatives do want to limit government interference, but that does not mean they are opposed to outlawing murder, which abortion technically is. And though it has religious ties, you don't complain to anyone when the justice system goes after a street murderer.

In your logic, murder is condemned by one of the commandments, so why isn't that an example of the lack of church & state separation??

Of course, you'll take the position that a fetus is not yet a life.  All liberals do.  So....tell me, if that's true, then at what point does it become a life???  At 3 months? At 6 months?  At actual birth?   And, if THAT'S true, then why was Scott Peterson, in that famous Bay Area trial, found legally guilty of murdering 2 individuals, his wife AND unborn child, a few years back.  (I'm sure you read about that one.)  The truth is.....life begins at conception.

Look at it this way .  When does the day begin?  According to your mind bent, and most liberals, the day begins at dawn...when the sun first rises.  But, it actually begins at 12:00AM. Just because you don't see the light of day until sunrise ... doesn't mean the day has not already begun.  I cannot understand how liberals (and if not a "liberal", those of a similar mind-bent)  cannot fathom this, running around spouting all about a woman's right to choose, a woman's right to control her body, and no one there to defend the rights of the unborn child. And I know the answer...your answer......the liberal rule of law......the right to do what is convenient, what feels good, or what is the most convenient (to them).  It's a selfish, give-me-what-I-want mentality, just like calling yourself an agnostic.  Because.....when you do that, you're shaking the onus of moral responsibility and of living within the designs of a moral code, where there's no need for self-discipline and no judgement for your actions. Now.....THAT'S being pragmatic (!), as you say.

As I said before .....you're almost 70 years old.  If you still don't know, isn't it about time you found out???  It kinda could be important.  Or, maybe that truth, even now, could become inconvenient.