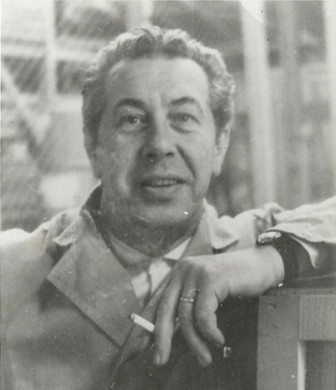 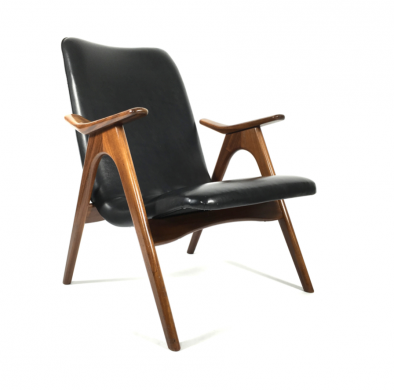 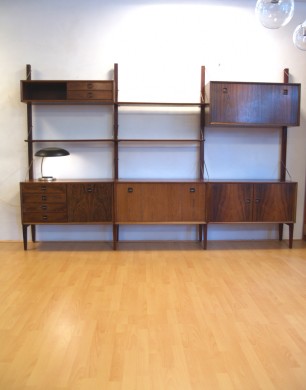 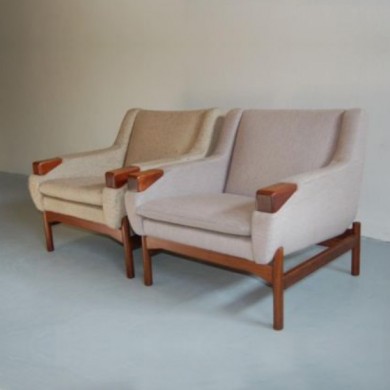 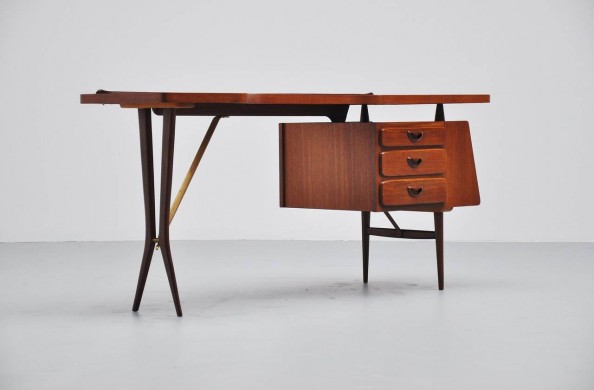 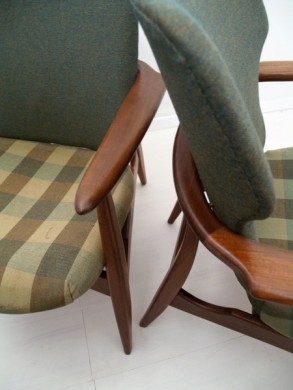 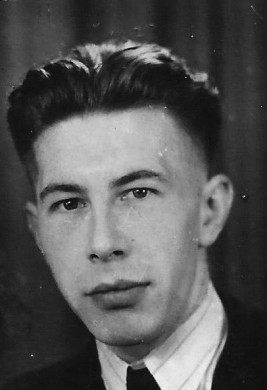 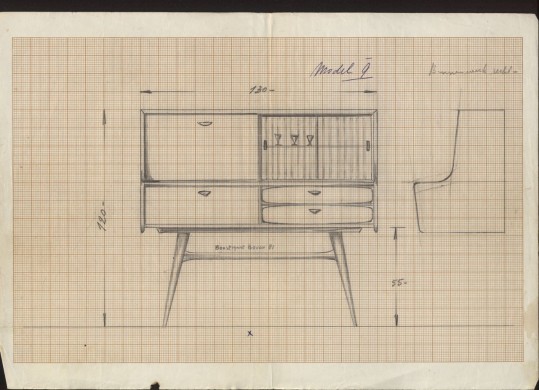 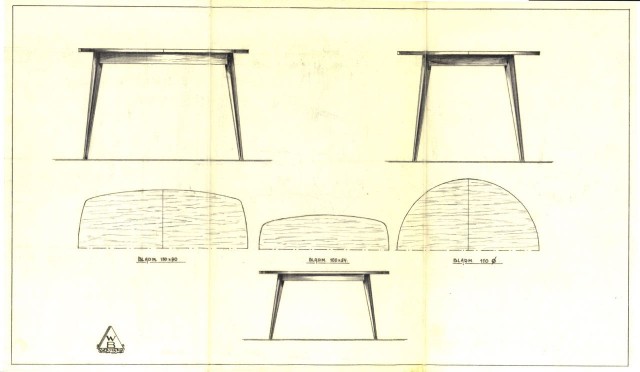 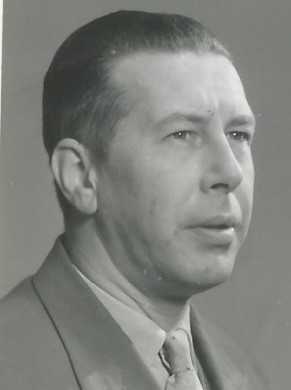 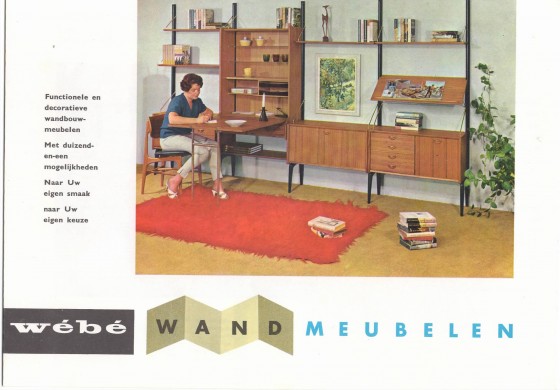 As far as I know of, he is no direct family. Nevertheless we share the same surname. He appears to have been a famous furniture designer in the fifties and sixties in The Netherlands. Lately I got the remark ‘I have a Van Teeffelen table, do you know him?’. No, I answered. But my interest was raised. I undertook a voyage of discovery and found out the following.

Louis was born on September 26, 1921 in Beneden-Leeuwen as the second son of Peter van Teeffelen and Anna van der Sterren. Beneden-Leeuwen was part of the then municipality of Wamel in Gelderland. Now Wamel belongs to West Maas en Waal.

A lot of fervour

His father has a blacksmith and farrier's shop with a hardware store. When Louis is 4 years old his father suddenly dies and the family moves from Beneden-Leeuwen to Wamel. After primary school Louis follows the craft school in Tiel. Louis is 19 years old when the war breaks out. For that reason and because of the family situation, there is no training at a higher vocational school or academy for Louis.

There was a lot of fervour in Louis, he was very curious. He studies in the evening for the subject furniture design and technical manufacturing at the Royal PBNA (Polytechnic Office Netherlands Arnhem). After the war, he also obtained a diploma for independent entrepreneurship and general commercial knowledge.

Just before the Second World War until 1952, he worked at two furniture manufacturers in Gelderland, including Salet's First Machine Furniture Factory. From 1952 he is an independent entrepreneur, but affiliated with contractor Baars and Zn. That company goes bankrupt three years later and thus also takes his company into ruin.

But Louis is not down and out. He goes to furniture factory Walraven and Bevers, later known as Wébé, where he is the chief designer from 1955 to the end of 1967. Initially, Louis designs furniture with a design language that relies heavily on the furniture style from before 1940. From the late fifties, Louis' designs have been inspired by Scandinavian aesthetics. Louis develops a unique style; it is unmistakable to recognize his 'hand'. His designs are organic in nature with sculptural elements, have phenomenal seating comfort and are very practical.

An example is the 'wing' lounge chair and the modular wall system. The finely lined coffee tables show that he also knows the aesthetics of Japan. Of his sculptural elements, the 'smiley' grips are the most characteristic. He designs an endless group of dining rooms, cupboards, television tables, desks, benches (sofas), armchairs and bedrooms.

In the early sixties, Louis sought a functional and artistic combination of wood with other materials. From this experiment arise designs of cabinets and tables in which ceramic tile tableaus are processed by Jaap Ravelli, a ceramist from Valkenburg (ZH) and mosaics from probably glass paste (Graniver) from the Glasfabriek Leerdam.

Halfway through the sixties interest in teak furniture in the Netherlands slows down. Louis's designs become tighter in shape. Rosewood is the most common. The cupboards with rectangular metal or square wooden handles are simple in shape but very good proportion. Several smaller cabinets can be switched to a large storage unit.

Some cabinets have narrow side or middle panels on which an elongated ornament can optionally be fitted. The cabinets, dining room chairs and tables were at that time made of rosewood combined with gray steel legs. The upholstered sofas and armchairs have combined metal bases and armrests with rosewood parts. All metal legs 'stand' on rosewood blocks.

In the late 1960s, Wébé focused on the demand for oak furniture. The factory is not a trendsetter but trend follower with a nice nose for coming markets. There are sketch designs of Louis found of furniture in the oak style that can be recognized in a folder of Wébé from the 70s.

In his spare time, Louis helps fellow villagers with plans to (re) build their house or shop interior. On behalf of Wébé he designs several houses for employees. Now known are a house on the Marijkestraat number 1 and four houses on the Rozenstraat (2, 3, 4 and 6) in Beneden-Leeuwen. From March 1962 Louis lives with his family at number 4. Dreams about holiday homes, boats and airplanes result in drawings and work plans, but are never executed.

In 1967 Louis developed rheumatoid arthritis in his hands. The disease progresses so that he can design and move less and less. Louis suffers a lot under this circumstance, in which he can no longer use his creative talents and ambitions. Fifty years old, Louis died of heart failure in his hometown on 30 April 1972.

Louis van Teeffelen (1921-1972) is a Dutch designer who is best known for his furniture designs for furniture factory Walraven and Bevers, later called Wébé. The purchasing consortium Topform is, in addition to other retail chains, such as V & D, and also Morres and Piet Klerkx, the largest buyer of Wébé furniture. Louis designs exclusive furniture for this. The sales area is mainly the Netherlands and Belgium.