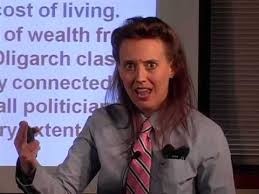 This is one gutsy broad!!!

it's worth the read to drill-down & read her post at www.barnhardt.biz

Ann Barnhardt is described as "a livestock and grain commodity broker and marketing consultant, American patriot, traditional Catholic, and unwitting counter-revolutionary blogger. She can be reached through her business at www.barnhardt.biz."  She has taken on Islam and they have noticed.

I'm going to kill you when I find you. Don't think I won't, I know where you and your parents live and I'll need is one phone-call to kill ya'll.

Re: Watch your back.

Luckily for you, there are daily DIRECT FLIGHTS from Heathrow to Denver . Here's what you will need to do. After arriving at Denver and passing through customs, you will need to catch the shuttle to the rental car facility. Once in your rental car, take Pena Boulevard to I-225 south. Proceed on I-225 south to I-25 south. Proceed south on I-25 to Lincoln Avenue which is exit 193. Turn right (west) onto Lincoln . Proceed west to the fourth light, and turn left (south) onto Ridgegate Boulevard . Proceed south, through the roundabout to Kornbrust Drive . Turn left onto Kornbrust Drive and then take an immediate right onto Kornbrust Circle . I'm at 9175.

Just do me one favor. PLEASE wear body armor. I have some new ammunition that I want to try out, and frankly, close-quarter body shots without armor would feel almost unsporting from my perspective. That and the fact that I'm probably carrying a good 50 I.Q. points on you makes it morally incumbent upon me to spot you a tactical advantage.

However, being that you are a miserable, trembling coward, I realize that you probably are incapable of actually following up on any of your threats without losing control of your bowels and crapping your pants while simultaneously sobbing yourself into hyperventilation. So, how about this: why don't you contact the main mosque here in Denver and see if some of the local musloids here in town would be willing to carry out your attack for you?

After all, this is what your "perfect man" mohamed did (pig excrement be upon him). You see, mohamed, being a miserable coward and a con artist, would send other men into battle to fight on his behalf. Mohamed would stay at the BACK of the pack and let the stupid, ignorant suckers like you that he had conned into his political cult do the actual fighting and dying. Mohamed would then fornicate with the dead men's wives and children. You should follow mohamed's example! Here is the contact info for the main mosque here in Denver :

I'm sure they would be delighted to hear from you. Frankly, I'm terribly disappointed that not a SINGLE musloid here in the United States has made ANY attempt to rape and behead me. But maybe I haven't made myself clear enough, so let me do that right now.

I will NEVER, EVER, EVER submit to islam. I will fight islam with every fiber of my being for as long as I live because islam is pure satanic evil. If you are really serious about islam dominating the United States and the world, you are going to have to come through me. You are going to have to kill me. Good luck with that. And understand that if you or some of your musloid boyfriends do actually manage to kill me, The Final Crusade will officially commence five minutes later, and then, despite your genetic mental retardation, you will be made to understand with crystal clarity what the word "defeat" means. Either way, I win, so come and get it.

Deo adjuvante non timendum (with the help of God there is nothing to be afraid of).

IN GOD WE TRUST

IN GOD WE TRUST

I can understand how he wrote what he did and I would like to read each statement, quoted here, in its original context, especially the last one, the most "scary." I am sure it was taken out of context. That's what right wing radicals do. That's their MO.

AS PREV STATED, EVERYONE WITH AN OPPOSING VIEWPOINT TO YOU IS DEEMED A RADICAL. HOWEVER, IN THIS INSTANCE, YOU MAY BE CLOSER TO BEING CORRECT.  I THINK SHE'S ACTING VERY FOOLISH.

This is your FREE society that the conservative organizations are fighting for. They certainly are not concerned with the democratic system except for the way they can manipulate it. And majority rule is a hindrance to them. And this is what you say you support. Again, shame on you! You are not a true patriot.