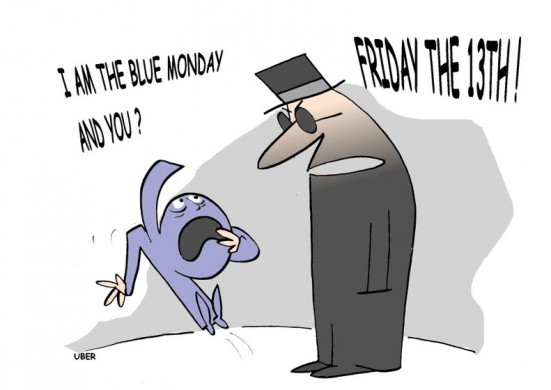 I have my own personal reasons, but, let's face it, it is a nearly universal expression of disgust. The reasons are many: the beginning of the work week; the traditional wash day; Blue Monday, etc.

There was a comic strip, in the states, called "Big George". Nearly every Monday the joke was "I hate Monday!"

You know that song, what's its name? I think it was performed by U2. The main lyric is: "I don't like Mondays". It is about a teenage girl who wakes up to a gray Chicago Monday and takes a gun to school and blows away a few fellow students. It really happened. When the police asked her: "Why?" she answered, "I don't like Mondays."

So what this got to do with happiness? Everything!

Until a few years ago, I was a runner. Monday was the hardest day; ten kilometres, three times around Vondel Park. Then tendonitis interrupted the routine. Also, Monday is a day that I fast. No oral gratification. A long, long day.

Neither of these self imposed disciplines did I look forward to. In fact, I wanted to wipe Monday from the calender. So why did I subject myself to a couple of things that didn't make my day?

Of course, both represent a story segment in my life. As a boy, I was winded after having run a couple hundred meters. And that was before I started smoking. But I was raised in a cloud of smoke. Both my parents were chain smokers and it affected me. I would smoke for 16 years before going cold turkey from two and one half packs a day. Six months later, I was putting on weight; that's when I started to run.

The fasting started about five years later because even with running five days a week I had to go on a six week diet, once a year, to shed the unwanted kilos.

There had to be a better way.

I reasoned that if I did not eat one day per week that might regulate the extra calories I couldn't avoid in my normal eating patterns. It seems to work. And why did I choose Mondays? Nothing happens on Monday. People don't give parties. There are no receptions. Hey, they don't call it Blue Monday for nothing!

But the "happiness" part ... well, I can no longer run and I miss it. I miss it for several reasons: I got a natural high from it and I was able to do something physical at 50 that I had not been able to do at 16. And, yes, it made me feel superior to the majority of the population.

As to the fasting, well it works. No more dieting. But also it is a test of my will power. I have to say no to natural cravings. I allow myself tea, coffee and water but NO alcohol. I curse Mondays until I turn off the light and slip into bed. My thoughts then turn to the fact that, when I wake the next morning, I'll be able to eat again. And I feel proud that, once again, I have got through another loathed Monday.